Well, I’ve got a film done - the question now is what the hell do I do with it?
Any answer I come up with just raises further questions. Do I shepherd it around to festivals? Do I put in online? Do I send it to every animation studio I can think of? Is animation even what I want to do full-time? There were so many other elements of the production that I enjoyed, like storyboarding and composing the music - would it be more valuable to pursue these instead, career-wise? Or, do I carry on doing the post-production and video editing work that kept me afloat after my BA and use the money I make from that to supplement animation as a hobby, as I do with my music?
Lots of options, which I suppose is a good thing as it casts a wider net of possibilities, however one of my main goals in taking this MA was to narrow down my plan of action. That certainly hasn’t panned out.
These days I’m mainly putting together press packages for festivals and sending off DVD screeners. To keep my nose clean, the version I’m sending out there is the shorter, less-sweary, non-copyright-infringing edit I described in the previous entry. When I decide to release it on DVD, this will be the version that goes on it for the same reason. The unedited, 17+ minute original version with that perfect song over the end credits will never get a screening now that the degree show is over. It’s a pity, because at the end of the day that, to me, is the true version of ‘House Guest’, even if the new edit does flow a little smoother. That’s why I’ve decided to bootleg myself! 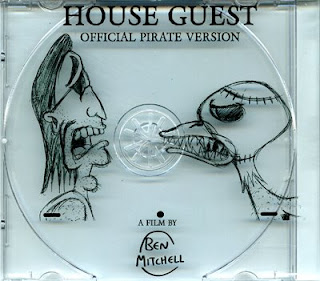 I can’t in good conscience charge people for a DVD of the original film when I don’t own all the music on the soundtrack, but if I’m just doing the rounds with friends and family there’s no real harm done, right?
The oxymoronically-labelled ‘Official Pirate Version’ is as bare-bones as a DVD can get, containing the cut and uncut versions of the film but nothing else by way of extras. To give it a nice, animationey feel the packaging design is taken from one of the rough layout drawings and printed on clear acetate. The end result is simple but, I think, pretty nifty. 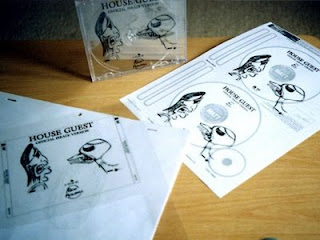 I like to make geeky little ‘special edition’ packages - when I put out the last two Struwwelpeter albums ‘Rapeseed’ (2004) and ‘Agnosticaust’ (2006) I made a batch of home-made versions for friends, family and the first 100 people to order each album online. It’s a nice excuse to create extra album artwork, get creative with the packaging design and include music and video content that would otherwise never see the light of day. In this digital age my generation may very well be the last to take pleasure in the physical representations of movies and music. Sometimes the ingenuity of the packaging can even contextualise the media content. You just don’t get the same vibe from a JPEG in an iTunes ‘album artwork’ window.
I’ve also whipped up a spec design for an eventual ‘official’ release of the film, which won’t happen until it either gets picked up by festivals or I give up trying. Wish me luck, because I’m a nice guy and I’ll treat ya right… 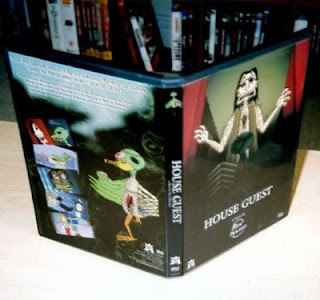 Posted by Struwwelpeter at 05:37