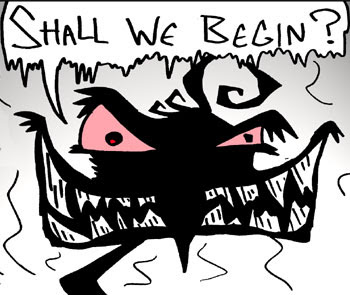 I am presently musing on the surprisingly wide-ranging and diverse subject of graphic novels, or bandes dessinées as the Montreal bookstores refer to them. It has previously been a casual interest of mine, although recently I’ve grown to become fascinated by them and developed a pressing urge to do one of my own. 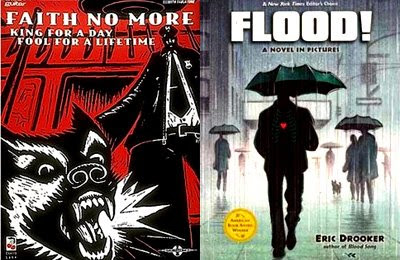 My initial interest came as an offshoot of my childhood devotion to the band Faith No More over a decade ago, when I traced the source of one of their album's covers to 'Flood!', a then-obscure graphic novel by Eric Drooker, a New York-based artist, poet and political activist. It was interesting to see the book’s story told without words, as well as seeing the author’s style develop and strengthen as it goes. At the start there’s a cartoonish goofiness to the characters, which evolves into a more disciplined rigidity that takes nothing away from the artwork’s stripped-down charm.
Since then I’ve stumbled across a handful of others that really serve the medium well. Unfortunately I’ve never been able to embrace comic-book culture. 'Batman' and 'Spawn' nearly won me over in my early adolescence, but ultimately I’m just missing that part of a geek’s brain that finds appeal in superhero stories.
Don’t get me wrong, I’m making no pretence of being above it - I’m one of the biggest geeks I know. While most of my friends’ interior decoration comes from IKEA, mine comes from Forbidden Planet. One time I even went to all the way to Birmingham just to meet Pinhead. Y’know, like an infant gets taken to meet Santa Claus at a shopping mall. Here’s the proof: 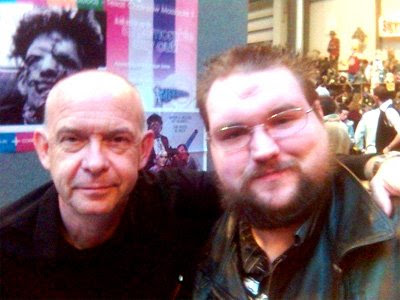 So that digression will doubtless have left no ambiguity - I’m a total fucking dork, and I've finally embraced it. Back to the graphic novels...
Being limited to non-Marvel/DC franchises my tastes are a little less obvious. I guess I generally enjoy the Indy section, veering toward stories with dark humour rather than the indulgent and/or emotional stuff. 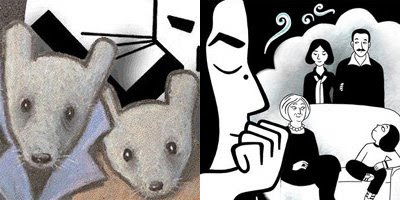 An exception being Art Spiegelman's ‘Maus’ which, like all good literature, is over-hyped until you read it and find it lives up to every expectation you could have of it. Marjane Satrapi's ‘Persepolis’ is similar in that the strength of the story is its virtue more than the artwork, and it’s ultimately an easier read, being peppered with welcome moments of levity. 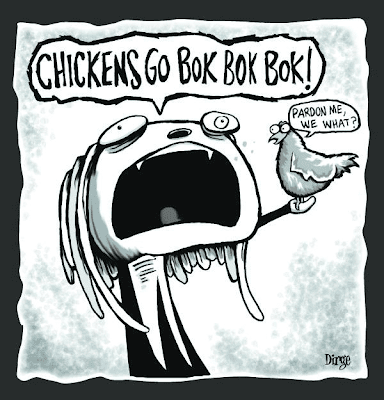 Jo Hepworth put me on to Roman Dirge’s ‘Lenore’ when I first showed her the concept art for ‘House Guest’, chiefly for its similar aesthetic. The development of its universe and the characters within remind me a great deal of my own, infinitely more obscure webcomic ‘Mitchells In England’. You can tell that the stories mean a lot to Dirge even in their apparent ridiculousness (in the good sense of the word). 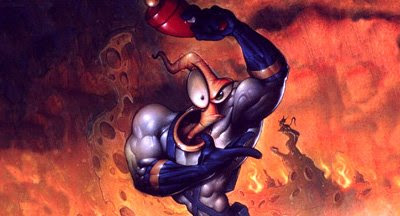 Doug TenNapel is probably my favourite in terms of artwork. He created ‘Earthworm Jim’, which was a fantastic games franchise (although, ironically, not an especially good cartoon series) and, among other things, writes and illustrates graphic novels that have such visual depth as to rival Bill Watterson. I’d recommend them all, but ‘Creature Tech’ is a great starting point.

Over the years, my cartoon sister and self maintained pretty much the same attitude toward one another.

The aforementioned 'Mitchells In England' had few consistencies - it was a strip that took people I knew and cast them in a series of fictional adventures. As it spanned ten years there were characters based on friends that would alternate in their association with my cartoon self, much as they did in real life. When my friend Ed moved away he eventually stopped being a character in the strip; When my parents got divorced their cartoon versions just disappeared - and so on. The only characters present in every* series (the whole strip was divided into twelve self-contained stories, and with each one I'd consciously develop the style and modify the premise) were myself and my sister, Erica, who was essentially the villain. 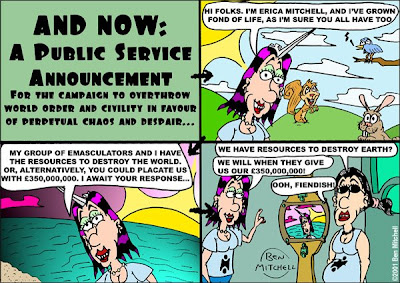 Erica threatens the world in series 10.
The in-joke with that scenario was that, bizarrely, the two of us got on in real life far better than any other siblings I've met. Even in the tempestuous furies of adolescence any mudslinging between us was swiftly resolved. Maybe that's just the way I remember it.
But when Erica left for college the arc of her character also changed, and after a period where she was barely a presence in the strip I reintroduced her with a heightened desire for spreading evil and despair. In the strip she forms an all-girl alliance called 'The Emasculators', eventually selling them out so that she can destroy the world and rule what remains. In the penultimate series her character has become so iniquitous that she has physically morphed into an androgynous demon-silhouette. 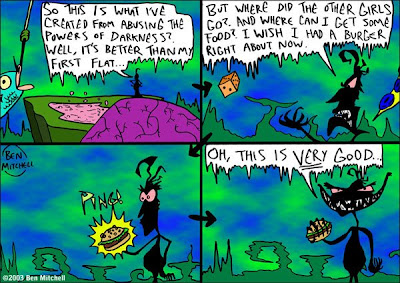 The decidedly-more 'evil' Erica from series 11.
To return her back to normal, I (well, the Ben in the comic) team up with a lime-green-suited Jesus Christ and follow her into a fugue of non-existence that she has created. At this point I was in college too, I guess I was trying to be deep. In the last series of 'Mitchells In England' the now-human-again Erica has become an actress whose face is repeatedly seen on billboards as a recurring sight gag.
The evil-silhouette Erica is probably my favourite character to draw. Mainly because she has no features, just eyes and proportions that vary on mood. This is the character I'd like to do something else with, perhaps by writing the story of how she originally grew so demented and Machiavellian, which was never explained in the strip. 'Mitchells In England' is definitely something I drew a line under, and I don't fancy doing another comic strip again any time soon, but I think a one-off spin-off (a 'spin-one-off', perhaps? Actually that sounds kinda dirty...) graphic novel might be a good excuse to revisit the character again. 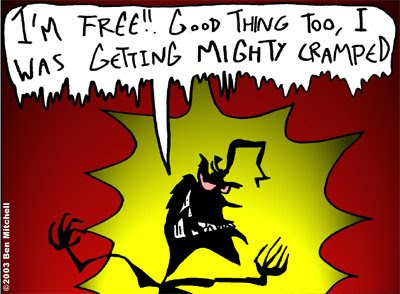 *Actually there was one series in 1996 that I misguidedly set in space, which didn't feature any of the other recurring characters save for the one based on me.
Posted by Struwwelpeter at 12:39 No comments:

In the month that has passed since the degree show I’ve set myself a handful of personal-growth projects that just haven’t been panning out. My endeavours to properly clean my apartment see me re-organising my crap just enough to make the place even more messy before I lose interest altogether. My attempts to lose weight are at odds with an alarmingly renewed fondness for sugary snacks and sitting still. My plan to give my imploded lovelife a shot in the arm is stymied by a sort of asexual indifference when it comes to pretty much every woman I know. Which I’m sure to them comes as something of a tremendous relief.
So, I’m untidy, overweight and single. Time to retreat once again to the world of cartoons!
While I return to the non-riveting world of freelance post-production, I figure it’s best to keep some more fun projects on the boil that will at best see some payoff and at worst keep me occupied.
The first on my list is a short film for the annual competition ‘Depict’, which challenges film-makers and animators to come up with a 90-second story. This is good in terms of labour but tricky in terms of coming up with a concept. Without going into too much detail, mine is essentially a projection of the way I’m feeling about myself, my place in the animation industry and in the world at large. My intention is for it to have a ‘big-sea-little-fish’ relatability to those who are (or have been) in a similar position, life-wise and career-wise.
Here’s some visuals for the main character design: 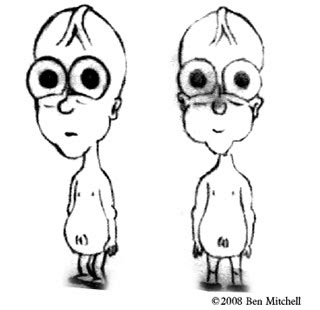 My initial plan is for it to be 2D animation, with a rushed, ‘pencil test’ aesthetic, but if there’s time I’d like to have said animation merge with cutout/stopmotion to give it a bit more depth. Here’s a hurried test animation I threw together as a pitch for my photographer friend Helen Shaw to try and get her on board. As you can probably determine from the footage, I’ll need all the help I can get.

Posted by Struwwelpeter at 09:17 No comments: