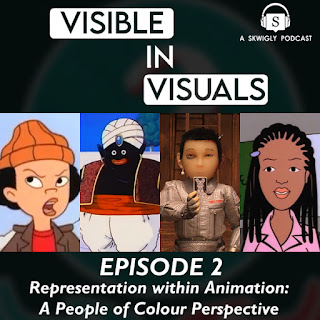 Following on from episode one, the second Visible in Visuals podcast has gone up today in which panelists Esther Ajibade, Bimpe Alliu, Mel Garber, Mohamed Orekan, Rizwan Rafiq, Tanya J Scott, Ash Wu and Beverly Yeang are chaired by Hodan Abdi to discuss the question “Why is fair and diverse representation within animation important and how can we improve it?”
In this panel, representation within animation content – and how these representations impact the audience watching it – is discussed from a POC perspective. Download here or stream below:

To get in touch with – or learn more about – Visible in Visuals you can follow them on Twitter, Instagram, YouTube and email visibleinvisuals {at} gmail.com.
While you're on Skwigly you might want to catch up on some recent interviews as it's been a minute or two since I've mentioned any on here. Recently I spoke with Cliona Noonan when her film was part of the Cardiff Animation Nights August screening; her film Wet & Soppy has since been released online and nabbed a Vimeo Staff Pick so give it a watch and learn more here.
I was also able to catch up with Daniel Gray whose previous film teeth (co-directed with Tom Brown) was a major case-study in my book Independent Animation: Developing, Producing and Distributing Your Animated Films. In our latest interview he discusses his spooky solo follow-up HIDE, made in collaboration with the National Film Board of Canada, La Cellule Productions and CUB Animation, in anticipation of its premiere at the Ottawa International Animation Festival last week.
Two other NFB productions screening at OIAF this year are Robin McKenna's Thanadoula as well as 4 North A, which brings together the talents of Jordan Canning and animator Howie Shia (whose previous work we've covered includes BAM and Marco's Oriental Noodles). They're all visually stunning pieces and well worth learning more about, so give the interviews a read and keep your eyes peeled for the films as they're sure to be hitting the festival circuit in a big way.

More nifty news for Laura-Beth Cowley's The Gift in that it is among the Finalists in the Salem Horror Fest's Wicked Shorts programme that takes place this weekend! You really couldn't imagine a better pairing. Looks like there's a lot of great things on to sink your teeth into so take a peek at the full programme here.
Posted by Struwwelpeter at 12:08 No comments: 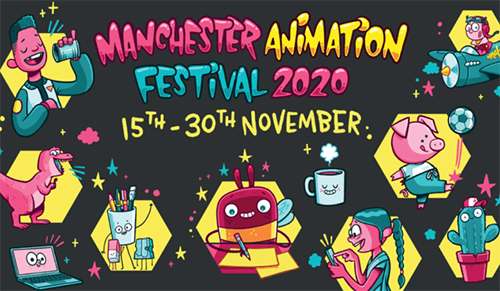 Some wonderful news in that both Laura-Beth Cowley's The Gift and my latest film Speed will both be among the line-up at this year's digital edition of the Manchester Animation Festival. As regular readers will be aware this is an event we've had a particularly fond relationship with in multiple capacities since it began five years ago. Festivalgoers can catch The Gift as part of the Short Films Panorama from November 15th with Speed part of the notorious MAFter Dark programme that will stream 9pm on the 18th. While the traditional Skwigly-curated screenings won't be part of this year's edition we are still cooking up an online version of our notoriously hair-thinning Skwigly Quiz that will be held on the 17th at 9pm, so hopefully see you there!

Quick follow-up to my recent post on this year's Encounters Film Festival, my dual role as both participating filmmaker and event helper-elf has called for a bit of schedule reshuffling and my original interview session has been moved from today to next week, mainly as I'm now hosting today's and things would run the risk of getting too meta if I interview myself.

If you're scratching your heads, basically I'll be running the following panels for the animation selection:

All of these take place at noon and will be posted up the evenings of their initial live streams and available until the end of the festival. The other sessions will be hosted by Encounters' Animation Programmer Kieran Argo at the same time each day, so be sure to check 'em all out. Overall these will cover a far wider spectrum of participants than the live Q&As of past editions have been able to so that's a bit of silver lining as far as our current predicament goes. For those of you chomping at the bit to hear my pithy insights into the making of Speed, I believe I'll be part of the noon panel on the 30th (a week today). Tune in and give me a good grillin' why doncha?

Posted by Struwwelpeter at 09:34 No comments: 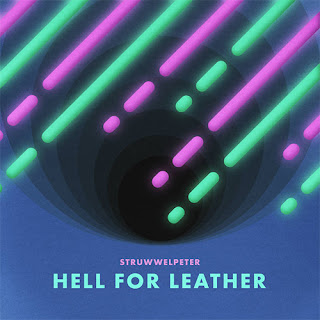 New music for your Monday!

Hell For Leather, my latest EP in anticipation of the still-cooking Struwwelpeter album My Head Is Too Small For My Body, is up now on a bunch of platforms to stream/purchase. As well as an instrumental version of the title track it also features alternate non-LP versions of Act Right (which originally appeared on my 2015 LP The Birdcage) and the previously-unreleased Worst of You, which will be a bit longer and ruder on the album proper when it comes out.

Depending on where your loyalties lie you can check it out on Spotify (below), Bandcamp, Google Play, Apple Music, Amazon and Deezer, with more to come.

Posted by Struwwelpeter at 02:05 No comments: 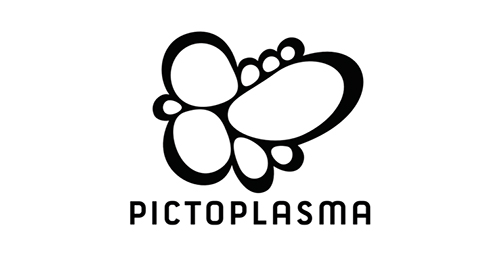 Hey there, youngfolk. You're all looking sprightly today.

Some general updates regarding the screening schedule of my latest film Speed for the rest of this month, which has turned out to be rather busy. Firstly the magnificent folks over at Pictoplasma will be showing it as part of their third short film programme Together, Apart, which will stream this Saturday September 19th at 5pm Germany time (4pm here in the UK) on the Festival Stream channel. If you're a fellow attendee I'm gonna try and nose my way into the Zoom meet'n'greet directly after the programme, so maybe see you there.

This weekend also sees the Encounters Film Festival here in Bristol kicking off for three massive weeks up until October 11th. My understanding is that, rather than there being specific screening slots, festival passholders will have access to the full programme to peruse at their leisure for the duration, so get on it! I will however be participating in a livestreamed filmmaker Q&A that festivalgoers can tune into this coming Wednesday, September 23rd at noon. In fact I'll be hosting a few of the other sessions as I'd previously done for the physical edition, so there's a chance you'll see my adorable hairy mug regardless. UPDATE 18/09: I've also just gotten wind that Speed will be part of a special Comedy Shorts presentation that will stream to passholders from 8pm tonight!

Then on Saturday September 26th you can catch Speed as part of the digital programme for this year's Anima Syros, closing out their International Panorama V screening which starts at 10:30pm in the Posidonia Virtual Hall. For the more adventurous Grecians among ye, there will also be a nearly-simultaneous (starting 10:45pm that same night) open-air screening of the same programme you can check out instead, which will be at the Posidonia Tsiropina Mansion. Fancy!

Also on the 26th the film will be screening as part of the Tokyo Anime Award Festival's delayed presentation of this year's films in competition from earlier this year. Speed will screen in Slot 3 at 7pm, repeated the following day at 4:55pm at the New Bungeiza (Marhan Ikebukuro Building 3F). 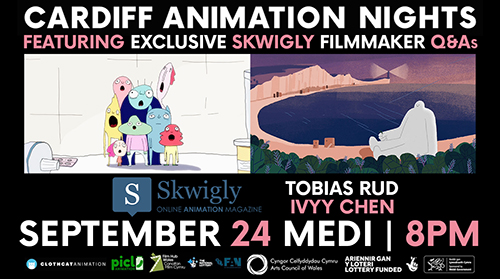 In non-Speed-but-still-animation-screening-ey news, I should mention that Laura-Beth and I will again be mucking in with our pals at Cardiff Animation Nights this month for some Skwigly filmmaker Q&As, this time with participating animation talents Ivyy Chen (Isle of Chair) and Tobias Rud (But Jane Was Deaf) respectively. It's another pearler of a screening so be sure to tune in to their YouTube channel this Thursday September 24th at 8pm and treat yourselves.

Posted by Struwwelpeter at 15:08 No comments:

State of the world 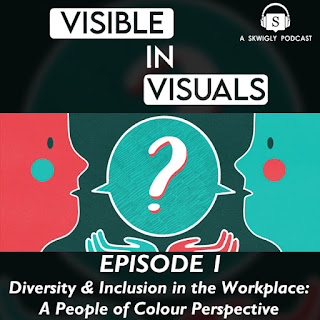 A couple new podcasts for your listenin' ears, folks!

Firstly I'm enormously proud to present the first podcast from Visible In Visuals, a new organisation pushing to make the animation and visual effects industries more inclusive. Following on from animator Tanya Scott's Skwigly piece Inclusion & Diversity in UK Animation Workforce: A Response, and subsequent online discussions including the recent panel Inclusion In Animation organised by ScreenSkills, UWE and the Cardiff Animation Festival, Visible In Visuals has been developed by Tanya and Hodan Abdi as an online platform pushing to make the animation and VFX industries more diverse and inclusive through honest, open conversation.

Animation Podcasts | Skwigly · Visible In Visuals 01 - Diversity & Inclusion in the Workplace: A People of Colour Perspective 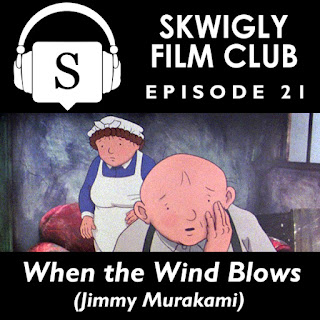 We've also wrapped up another batch of Skwigly Film Club podcasts this week, with our latest episode seeing us watch-through another Raymond Briggs weepie When the Wind Blows, directed by Jimmy T. Murakami. These have been a lot of fun to do and I reckon it's very likely they'll continue once we're all a little less busy later on in the year. Certainly it looks like this lockdown lark isn't easing up anytime soon so it's a nice little series to have bubbling away. Give us a shout on Twitter, Facebook, Instagram or regular-ass email if you have any film suggestions for when it kicks off again. In the meantime you can stream the episode below or get it downloaded here.
Animation Podcasts | Skwigly · Skwigly Film Club 21 - When the Wind Blows
Posted by Struwwelpeter at 12:52 No comments: