Episode 3 of the Skwigly Animation Podcast is now up, and I have absolutely no qualms about unabashedly confessing that I think it turned out great. This edition includes a chat with Nancy Beiman - Disney veteran, Sheridan lecturer and author of some essential animation texts, such as "Animated Performance", a fantastic guide to advanced character animation you should all check out.
We also discuss the impending new animated series of "Ninja Turtles", the rules (yes, it turns out there are rules) of Road Runner and the approaching new season of "Futurama". The latter is especially timely as, in defiance of my expectations at such an early stage of the podcast's run, I was able to chat with one of my generation's most prolific and versatile voice-over actors, Billy West! 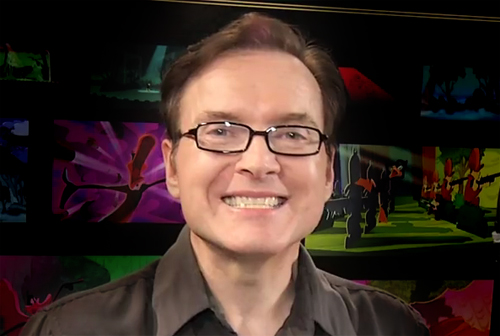 I'm sure most of you will be aware of his characters from "Futurama" (such as Fry, Farnsworth, Zoidberg and Zapp Brannigan) as it's been the main vehicle and longest-running showcase for his talents as a performer. On top of this, to me he will always be an essential component of "Ren and Stimpy", the show I've frequently cited as the main reason I pursued a career in animation. Whatever your take on the politics of the show's behind-the-scenes turmoil (mine being that it's not really any of my business) I'm a staunch defender of both the show's pre and post-John K vitality and ballsiness. Going by the paraphrased expression that animation is 90% sound, Billy West's voice work as Stimpy - and later Ren - as well as a host of supporting characters was an essential ingredient for the show's overall success.

Of course it was the chemistry between him and other players like Gary Owens, Cheryl Chase, Alan Young, Harris Peet, Jack Carter and, of course, Kricfalusi himself in the early years that guaranteed the flow, as it is now with his current "Futurama" co-stars Katey Sagal, Maurice LaMarche, John DiMaggio, Phil LaMarr et al.
So, as you can imagine, this particular interview was a little more daunting and saw me less grounded than I am with most others, but he was tremendously cool, open and honest to talk to, bearing with me when my jerry-rigged Skype alternative shit the bed not once but TWICE. At the end of the day I'm over the moon that I got the opportunity and I really hope the podcast audience gets a kick out of it too.
You can listen to the whole thing below or download it here. Joy!
Skwigly Podcast 03 (18/06/2012) - Nancy Beiman & Billy West by skwigly
Posted by Struwwelpeter at 15:29