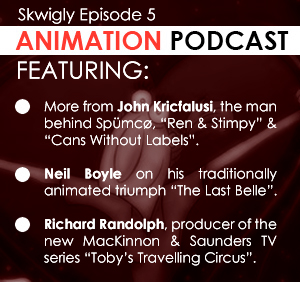 It’s podcast time again, though this edition has been somewhat delayed for a number of vague and slightly frustrating reasons. The overall Skwigly operation has had an overhaul on the cards that will benefit all involved, including its audience, though progress on this has been halted for some reason or other. At the end of the day it’s stuff I’m simply not in the loop about so until I know what’s up I can’t really elucidate further. But I’m confident things will get pretty exciting sometime in October at the latest.
Until then give this latest episode a listen and, if you so desire, download it for keepsies! There’s the usual dollops of cartoon geekery such as 90s cartoon nostalgia and Wacom Cintiq love, but as ever the real highlights are the fine folks Steve and myself get to interview. These include Neil Boyle, protégé of Richard Williams and director of the fantastic and nearly 100% traditionally animated film “The Last Belle”, along with Richard Randolph of Komixx, producer of the new kids’ show “Toby’s Traveling Circus” who has some very valuable insight into that side of the looking glass for any aspiring producers out there (who I consider myself to be amongst). Also there’s part two of my interview with John K, which I’m still over the moon about and expect I will be for a good long while to come. Now that his Kickstarter campaign has come to a successful close, this portion of our chat covers several other means of his pre-“Cans Without Labels” career, including a heartwarming tale of Bob Clampett’s…hormones. You can listen to the whole thing below or subscribe on this newfangled iTunes thingy the kids are all talking about.
Skwigly Podcast 05 (19/09/2012) - John Kricfalusi, Neil Boyle & Richard Randolph by Skwigly Animation Podcast
On a final note, I’ll be the beardy face of Skwigly at this year’s Animated Encounters, which is fairly convenient as the Arnolfini where it’s held is pretty close by. I’m in charge of pretty much all the festival coverage for the magazine so if you see me in the crows all on my lonesome then come say hi. Or just point and laugh derisively, as well you should.
Posted by Struwwelpeter at 13:00