Quickie update regarding some upcoming screenings for my long-in-the-tooth Christmas short “The Naughty List”.

For those Spaniards amongst you who’ve yet to catch one of its TV airings on Canal+ Xtra, it’ll be on this Tuesday (27th) at 2:40pm. I suspect this will be one of its last TV showings – if not, the last – on that particular network, so do give it a pre-siesta watch if you’re so inclined. All told the channel’s been very good to me and my li’l film over the past year, screening it pretty regularly despite it being so season-specific, so gracias to the Canal+ folks for the exposure (and the extra chunk of change didn’t hurt none either).

Mere days before the film sees its third Christmas since completion - mother of God, time goes by fast – it will be screened on December 22nd at the West Side Cinema in support of “Rare Exports”, a Finnish Christmas film that passed me by but I’m tempted to check out as it seems to be quite highly regarded. Unfortunately I can’t make it to that one as it’s in Orkney which is pretty much as far away from me as possible without leaving the UK altogether. 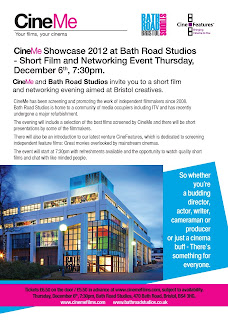 Earlier in the month and closer to home, the film will be screened on December 6th at Bath Road Studios here in Bristol for CineMe Showcase 2012, a networking evening that will also include some of their previously screened films (“Naughty List” and a few others of mine were included at one of their events back in April). I’m aiming to be there to scope out the premises and hopefully not bomb. So if any of you readers decide that’s the night you want to start stalking me, I’m pretty much handing you my exact whereabouts on a platter. Spectacularly nearsighted of me, I’m sure I’ll come to realise.
Posted by Struwwelpeter at 17:55