Oy, with that white balance... 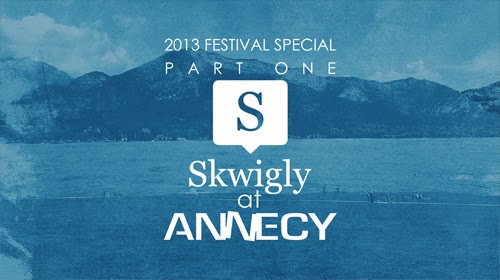 One of the lingering Skwigly projects I finally knocked on the head during my time away (mainly by scrapping the laboured first attempt and doing a simplified re-edit from scratch) is our first proper documentary covering the animation scene of 2013. Given it's a pretty mammoth event, the first doc is centered entirely on the Annecy International Animated Film Festival which myself and Steve visited last summer.

I'm pretty proud of the amount of coverage we managed to get done and it's one of the most longform video editing projects I've undertaken in a good long while. Given that it was shot using basic, high street HD camcorders I think it comes off as pretty watchable. While some higher-end technology might bolster the slickness of this type of video, really it's the talent of our interviewees who agreed to be involved that sells it. The line-up includes Marcel Jean, Eric Goldberg, Lauren MacMullan, Robert Morgan, Isabel Peppard, Ainslee Henderson, Will Anderson, Bill Plympton and Chris Landreth, with contributions from Corrie Francis Parks, Kris Genjin, Robbe Vervaeke, Jamie Badminton and Sarah Gomes Harris.

You can stream it online or direct download it, either way if you enjoy it please share it around as I'd love for this to be one of the strands of what we do that has the opportunity to evolve. If nothing else, it should make you appreciate the podcast all the more for not having to look at these two creeps:

Posted by Struwwelpeter at 15:44