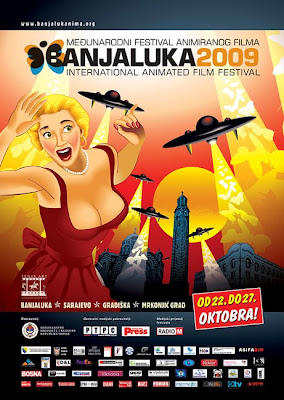 Quick festival update, the Banjaluka International Animated Film Festival 2009 will begin a week from today (the 22nd) and 'House Guest' will be included as part of their Competitive Program. These are divided into different blocks, and in all candor I'm not entirely sure which one my film's in. I'm guessing from their film list that it's the last film to be included in the Competitive Program 3 segment, which will be at 9pm on Sunday 25th, then replayed at 3pm the next day. Both screenings will be at the Palas Cinema.
Posted by Struwwelpeter at 11:29