As seasons turn and hairlines recede, the need for change has become ever more apparent. While my life, health and fitness level could all do with a complete overhaul, I'll start small by redesigning my website. 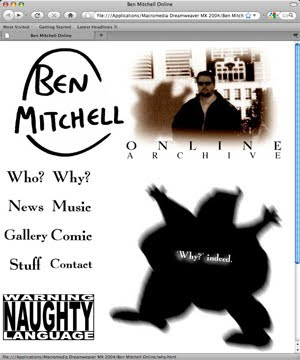 Layout for my old site's menu page, from back in 2002. I think I kept this around until 2005.
It's actually been a while since I had a personal site. My previous one was a sprawling mess of rollover images with a needless wealth of self-important information on pretty much every personal project I'd ever attempted to make marketable. When the hosting site disappeared I never bothered to relocate the site and have since relied on this blog and MySpace (trust me, it was relevant in 2006) as my main web presences. With my attentions more on "House Guest" and its reception, the blog is updated a fair amount while the other sites have died a cruel death at the hands of public disinterest. Now that "House Guest" is close to running its course on the festival circuit and I'm nearing the end of production for several projects (including the agonisingly slow-to-gestate- fourth Struwwelpeter album) I've outlined a plan to best represent myself as a professional freelancer, while showcasing the development of ongoing work:

•A main site to serve as a hub that brings everything I do together. Chiefly this would link to all music, film and book stuff I've produced while also giving an overview of my ability and freelance experience.
•A redesigned Struwwelpeter site to help promote CDs and "The Book of Women" when it is released.
•Archival mini-sites for certain projects ("Mitchells In England", "House Guest", selected CD releases etc.) that I feel are ready to have a line drawn under them.

Putting these all together, the scrawled site map is huge and a little intimidating, especially as I've resolved to use it as an excuse to get up to speed with CS4.
This is a proposed layout for the main site's menu page. 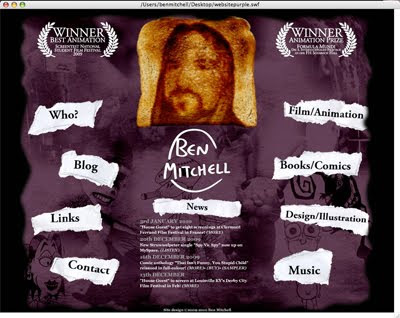 It was designed last August to go with the look of my current DVD showreel. The plan then was to get the site redesign done by the end of the year, but something shiny caught my eye and suddenly six months had gone by. I think I'm in a more suitable frame of mind - specifically a horribly ill one that sees me mostly housebound - to kick things into gear now.
Posted by Struwwelpeter at 00:07