It's been a mostly sleepless week living off cornflakes, yoghurt and instant coffee (my digestive tract is both anxious and befuddled) as I'm gathering pre-production materials for two short film pitches. Hoping to stick with my pattern of producing one short of my own per year, I'm leaning toward the more developed, easier-to-pull-off "Bullies". I have a script and a large chunk of the storyboard done, plus I can get on the asset building while I wait to hear back from potential backers. That way if I don't get any bites I'll have enough material in place to pursue other opportunities or possibly just take more time to knock it out myself.
I'm really excited about this one as it's shaping up to be a completely different visual experience than my previous films, relying more on the production processes of certain commissions and slightly more contemporary character design work. To that end I'm torn between showing off or keeping under my hat the proposed designs I have now. So here's my concession: 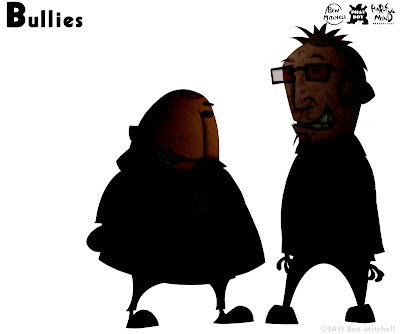 Speaking of short films (which I guess is pretty much all I do on here) Sophie Klevenow's 2009 short "Noesis", for which I did the sound mix, just got accepted into the AG Kurzfilm German Shortfilm Catalogue, which is excellent and well-deserved news. It really is uniquely remarkable for a student film and has been very well-received with good reason. If you've yet to see it I'd recommend you check it out.

Some screening news to end on - "Ground Running" will be getting another showing at this year's Skepto after its inclusion last year. It's part of a 'Best of 2010' pre-festival screening on the 25th which is pretty flattering.

Elsewhere - Tamil Nadu, specifically - "The Naughty List" will be part of the 2011 International Short Film Festival of India which starts on the same day. Given the country's increasing relevance within the animation industry it's very encouraging to get a screening over there.
Now to prepare for a weekend of scanning and compositing, fueled by my 18th Müllerlight of the day...
Posted by Struwwelpeter at 12:32