I'm about to pop my cherry. In the independent-graphic-novel-self-publishing-and-promotion sense, that is. This weekend is the Bristol Comic Expo, which takes place just down the street from me and is perfectly timed as I've just received my first batch of proofs for "Throat". MASSIVE, RAGING YAYNESS!!
I've never been at an expo as a vendor, in fact I usually just go to these types of things to geek out , and not very often - we're talking twice in seven years. So it's safe to say that, all things considered, I'm a little green. Hopefully my fellow comic book geeks will be kind and not treat me like the new kid in school who talks weird and smells funny. Essentially this weekend will serve as a trial run for the MCM Expo in London, which is a fortnight from now, so I can use the next couple days to fine-tune my sales patter and presentation skills. The latter, at present, boils down to throwing as much of my priced-to-own shit on a table as will fit, in vaguely-organised stacks; the former is pretty much just this:
I'm pretty sure I'll come back rich. 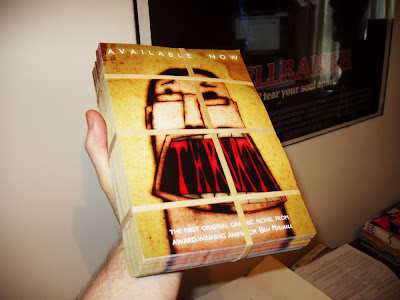 It's all been such a rush, what with the book only just coming out, that I haven't really had time to construct a marketing strategy beyond some local flyering. There'll be a proper website, (possibly-animated) promo videos, cards, hand-outable mini-comics and suchlike a-comin', but for now I just have my books, some sampler CDs and a poster. Okay, I didn't have time to get a proper poster printed. What I did have, however, were nine sheets of Asda's finest "That'll Do"-Range econo-paper, a guillotine and some sellotape. They don't call me ol' Resourcefulness McGillicutty for nothin': 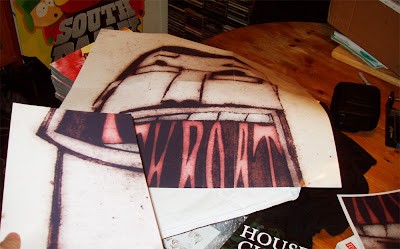 Switching creative hats, the second Skwigly Podcast is now live! After what turned out to be a pretty successful pilot experiment back in March, Steve Henderson and I put together a fairly mammoth follow-up which we hope to in turn develop into a twice-monthly affair. 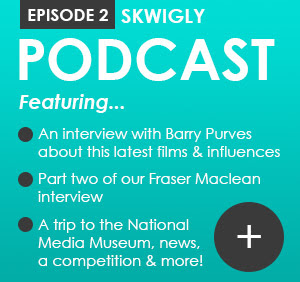 This episode focuses on one of our favourite stop-motion masters Barry Purves, responsible for such brilliantly-executed works as "Next", "Achilles", "Screen Play" and his two most recent films "Plume" and "Tchaikovsky". There's also a competition to win his books along with discussions on the recently-leaked controversial documentary "The Sweatbox", the longevity of the animated sitcom and what dicks animators can be to live with. So give 'er a listen, a like , a download , a share, an iTunes subscription and/or a hearty British retweet if the mood grabs ya! Skwigly Podcast 02 (09/05/2012) by skwigly
Posted by Struwwelpeter at 15:49