"Something terrible is already happening..." 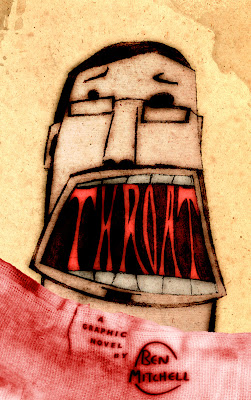 Well, I've been floating on roughly four hours of sleep a night for the last week, but it's finally over. "Throat", my very first original, non-adapted graphic novel, is finished. Only one day passed the deadline, too! Such is the beauty of print-on-demand distribution, the book can be bought online immediately and in two formats. First there's the standard edition with black and white interior artwork for a measly tenner, then there's the deluxe, full-colour edition for a less-measly twenty-five squids. I know, I know, it's pretty steep but it has to be to cover the production costs (at 230 pages it's a fairly chunky comic).
These versions are currently being distributed by Lulu, my P.O.D. go-to, but I'll be pushing hard to get wider distribution and an Amazon listing, which I've had some luck with in the past. While I wait, the plan is to be as proactive as possible so far as pushing it at expos and such. As per, this blog will be the place for the info along with throatbook.com which has been updated to include purchase links, although it's still pretty much a teaser page until the 12th. 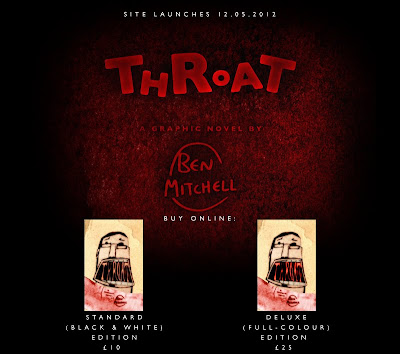 I'm a little too emotionally exhausted (aaw, ain't I pretty?) to get into the details of the whole process just yet, but I do want to take the time to thank those of the various people who I reached out to for feedback that got back to me. In the last couple months I managed to fine-tune the story and character development, which has made a huge difference in terms of clarity and keeping the whole thing engaging throughout. So sincere thanks go out to Sam Morrisson, Alison Eire, Karin Saari, Jane Davies, Luca Kiss and Michelle Cioccoloni, as well as special shout-outs to my old schoolmate Toby Shipway for his medical insight, Jo Hepworth for her general awesomeness and support and Nusha Amini for keeping me motivated since I started the earliest development work on the project nearly two years ago. Even for a side-project, that seems like a long-ass time to work on a book, and even though things didn't kick off properly before last August, it felt like a lot longer.
Oh well. Break's over. What next?
Posted by Struwwelpeter at 15:24