The "What the hell happened to October?" Blog Post

Despite my semi-regular declarations of being snowed-under with life, work and other fabricated commitments, it's actually quite rare to let over an entire month go by without forcing my inanities on the blogosphere. Things have kicked into gear in an amazing and, at times, slightly terrifying way and my time is rarely my own. Probably for the best as when I have free reign over my own time I tend to use it playing emulated SNES Lemmings while eating dry cornflakes from the box. I'm not even talking name brand here, folks; I'm talking ASDA's own. Eeyup.
All in all, life is good. Faith No More are plugging away in the studio and Twin Peaks is coming back, so those two alone should give me a will to live at least through 2016. Work-wise I'm back in the bits and pieces world of animation freelancing alongside the now quite full-on Project Group Hug (it's a book, by the way, though I doubt there was any lingering mystery as it's been up on my LinkedIn for a while now).
This follows a quite long contract with the fabulous folks at Slurpy Studios doing a series of educational videos for Oxford University Press. It wrapped up in September and you can have a look at a couple of the vids I worked on at the Activate Kerboodle site.
Skwigly is still maintaining its stride with some great coverage up since I last posted. New articles include reviews of Signe Baumane's wonderful Rocks In My Pockets (which I'm delighted to see is performing brilliantly) and Floyd Norman's quasi-autobiographical animation handbook Animated Life.

Interview-wise there are new chats with Canadian NFB directorial duo Nicola Lemay and Janice Nadeau (No Fish Where To Go) as well as Australian animator Anthony Lawrence (Grace Under Water), both of whose films were screened as part of this year's London International Animation Festival which I was able to swing by. Another NFB film which premiered in the UK recently was Seth's Dominion, a brilliant feature documentary on Canadian cartoonist Seth directed by Luc Chamberland (interview here).

Also worth catching up on are the latest episodes of Lightbox, with J.G. Quintel (Regular Show), Mikey Please (Marilyn Myller) and Dan Ojari (Slow Derek) of Parabella Studios and experimental, drawn-on-film artist Steven Woloshen (1000 Plateaus).
October's podcast has a fabulous line-up also: Animator Craig Smith interviews Tonko House (who made the amazing Dam Keeper), Julia talks to Jorge R. Gutiérrez (director of Reel FX's The Book of Life) and I chat with artist Lisa Hanawalt, designer on Bojack Horseman, a show I have to say I'm quite tickled by. 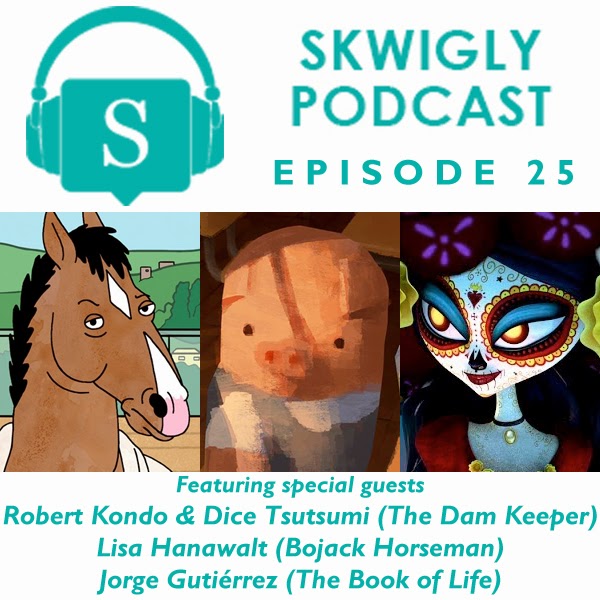 All the usual listening options are here for you, folks. Stream below, download for keepsies or subscribe, whydoncha?
This marks the twenty-fifth episode to date (not even including the various specials and minisodes) and I have to say the continuing support and feedback over the years has been amazing, so thanks so much to all for keeping us going. From my perspective there's no danger of it slowing down soon, so here's to twenty-five more!

Posted by Struwwelpeter at 15:10