News for a dreary Sunday afternoon

I'm just coming off a very nice holiday break and the inevitable catch-up-with-life stuff that follows, so here's a roundup post of some coverage that went up while I've been away as well as some general updates.
There are two new Lightbox videos, beginning with an exclusive interview with Canadian animation legend Cordell Barker (The Cat Came Back, Strange Invaders) on his new NFB film If I Was God, which boasts some gorgeous stop-motion; more recently one of our newer contributors Beverly chats with Pierre Coffin and Kyle Balda, directors of Minions.

Thanks to mass merchandising and over-saturation I'm sure the world at large has a daily fill of Minion excess whenever they step out of their homes, but her interview does go into some interesting places as regards the range of animation techniques on offer, so I'd recommend taking a look.
Elsewhere on Skwigly, Laura-Beth has a fantastic interview with Australian animator Adam Elliot, a mutual hero of ours. Even if I were 100% impartial I'm confident I'd say it's the best and most thorough piece on his latest project Ernie Biscuit, so treat yourself and give it a read.

Speaking of treating yourselves, Alan Holly's amazing short Coda is now online in full. This was one of my absolute favourites of last year's shorts crop and I'm very happy to say there's an in-depth interview with Alan up now also.
As well as some memories of the underappreciated 90s animated sitcom The Critic, I have another NFB interview up with Claude Cloutier, whose new film Carface was part of Annecy 2015's official selection (along with Ernie Biscuit; If I Was God, bafflingly, played out of competition).

In non-Skwigly news, I now know the screening times for my latest film when it premieres at OFF in August, the first of seven showings being Monday 24th at 9am. The two programmes it plays in are Main Competition 4 and Animation 3, both of which have full time/venue information listed (if you're a master detective you might even be able to keenly scrutinise both and work out which one's mine). 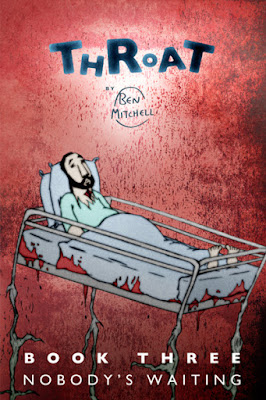 Also the proposed release date for Throat: Book 3 - Nobody's Waiting of August 3rd is now confirmed, with a cover mockup I'm not 100% wild about. But all being well a book that sort of looks like the one above will be out that week. The end is in sight, folks.
Posted by Struwwelpeter at 11:38