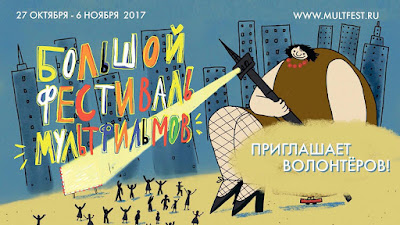 Following last month's Russian tour it seems the nation can't get enough of our paddlin' pal Klementhro. This month and November will see it play in Moscow for the Big Cartoon Festival, a big festival of cartoons I would assume, or very possibly an average-sized festival of big cartoons. Probably the former as my cartoon is not especially big. The screenings will kick off on my birthday (which also just happens to be International Animation Day - coincidence? Well, yes). Full info as follows:
The film will also screen as part of a mini-tour through Saint-Petersburg, Kazan and Ekaterinburg after the festival but I don't have all the specifics for those screenings just yet. So hang tight, comrades.
Posted by Struwwelpeter at 07:58