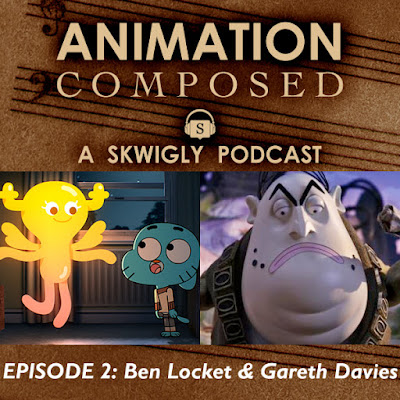 Continuing Animation Composed, Skwigly’s celebration of the harmonious relationship between music and animation presented by myself and Wez Allard, our second episode delves into the world of composing for animated TV series, with special guests Ben Locket and Gareth Davies.
Born in Australia and presently based in London, Ben’s work in television centers around the long-running Cartoon Network series The Amazing World of Gumball, as well as the recent Magic Light adaptation of Roald Dahl’s Revolting Rhymes – both of which presently nominated for a Children’s Animation BAFTA. Revolting Rhymes also recently won Best Original Score at the Sapporo Japanese Short Film Festival and, as well as an upcoming soundtrack release, has been screened to a live orchestral accompaniment over the past year with the next performance taking place this coming February at the Southbank Centre.
UK-based composer/songwriter Gareth Davies has a wealth of experience composing for television and corporate clients alongside his own personal projects. He has most recently written for the animated television shows Scream Street (CBBC) and Everybody Loves A Moose (Rai). He also produces original songs under the moniker Band of One.
Also featured in this episode are musical scores to the National Film Board of Canada productions The Head Vanishes (Dir. Franck Dion) and I Am Here (Dir. Eoin Duffy) by Pierre Caillet and Menalon respectively, as well as more work from previously featured composers David Kamp (Réka Bucsi’s Love), Mathieu Alvado (Who’s Afraid of Mr. Greedy? from Gobelins) and Ephrem Leuchinger (Anete Melece’s Analysis Paralysis).
Full playlist:

Posted by Struwwelpeter at 19:29