I figured that to help shape an impression of where I'm coming from, I'd include in this blog case studies of numerous visual and stylistic influences on my work. So here's the first one. Hooray! As I'm sure you are all aware, YouTube is an invaluable resource for incredibly rare footage, shows you can't buy or watch, hard-to-find interviews, concerts etc. At least, it would be if those fuckin' narcs didn't constantly delete videos because of copyright infringement. In all honesty, how much damage could having a crappily-compressed YouTube video online do to DVD sales or HDTV viewing figures?

But I digress in that interminable way I often do. I had put online a video that got deleted as it's comprised entirely of clips from The Ren & Stimpy Show, the genius creation of contemporary animator John Kricfalusi, with me babbling about how great it was. I think that message frankly needs to be heard still, especially in this era of Loonatics Unleased, 6Teen and all manner of other uninspired dross. This was done as part of my MA course, as an ungraded exercise in putting together a presentation on our creative influences for the sake of getting comfortable with the concept. I decided to do it in a kind of documentary style so I could cram as many points and visual gags as I could. 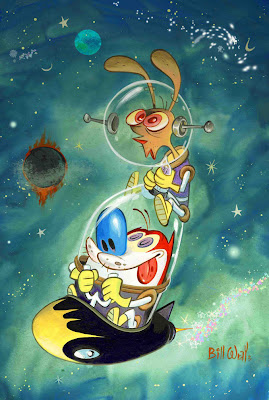 If I were to actually post a blog entry as to why Ren & Stimpy was the best thing to happen in animation since the Looney Tunes, it'd be the length of a goddamn novel. So I'll spare you all and stick with the 6 minute summary. My regret with the vid is that I sort of dismiss John K's ill-fated revival 'Adult Party Cartoon' as an afterthought at the end. This is mainly because I consider the two shows to be entirely separate beasts, and 'Adult Party' is laudable in its own right. I may very well give it an entry later on as a separate case study. Adding to the absurdity of Viacom ordering that the presentation be removed, when it was up I got a ton of feedback from people who had never seen the show - or had forgotten it - that had decided to go buy the DVDs after seeing this. So by having it up I was making the company money. Anyway... Have a look (wmv format)

As an addenda, back when this was on YouTube I was frequently asked why my voice was so affected. Unfortunately I really do speak in one of those not-quite-anything hybrid accents. Sorry folks.
Posted by Struwwelpeter at 08:50

Big excitement this monring when I clicked on the (RSS?)link and found another gem.
One question. Is the phrase "putting on an affectation." some sort of new age post modernist lingo ... or?

Really it just means putting on a false impression (like a fake accent). Which would be the case if I spoke in either a distinctly British or Canadian accent but my actual voice is mired somewhere between the two. As a consequence people either think I'm British doing a bad Canadian accent or Canadian doing a bad British accent.
I like talking about me.