One of the greatest freedoms inherent in my aforementioned first love, Ren & Stimpy, was Kricfalusi's ability to caricature and anthropomorphise beyond identifiability. If you didn't know that Ren was a dog (or, more specifically, an 'Asthma-Hound' chihuahua) and Stimpy was a cat - an obvious pairing of species that goes back centuries - it would take an extremely lateral-thinking mind to guess it from their appearance. 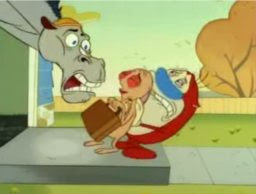 Ren's long, distinctly un-chihuahuaian ears might have one lean toward assuming he's some type of emaciated rabbit, or his signature 'W'-shaped mouth at times resembled a proboscis (the show itself referred to him as resembling a mosquito on several occasions). Stimpy, well, Jesus wept, if you honestly thought 'cat' when you saw him for the first time, you should seek psychiatric care. Interestingly, most other animals in the show aren't as disproportionately exaggerated. The deadpan Mr. Horse, though humanistic, was very obviously a horse, even without the name there was no ambiguity there.

A more logical case study to pursue would be the greatest animated duck in creation, Daffy (to hell with Donald, the hoarse, lisping bitch). My logic being that, well, my antagonist is also a duck. Ah, my deep and multi-faceted mind.
When you look at the evolution of Daffy (and we're stopping with the late 50s, if anyone brings up the horror of Loonatics Unleashed I will piss-slap them) there is a tremendous change, not just to his design but his character as well. On a DVD commentary for Bob Clampett's 1946 short 'The Great Piggy-Bank Robbery', John K. in his capacity as cartoon historian acknowledges the character was initially 'daffy' as the moniker suggests, evolving into a far more subdued, crankier, 'jerk' character. Where Mr. K and I differ is our preferred variation - while he prefers the abrasive, off-the-wall Daffy of the earlier 1930s and 40s shorts, I'm more a fan of the calmer, calculating one of the 50s, if for no other reason than that's the one I was exposed to more often as a young'un. Obviously of the two of us, John K. knows his shit more than I do given age and experience (in fact, why are you even reading this? Go read his blog right now!) and his taste is doubtless attributed to the freedom the loonier Daffy allows in terms of just how crazy the animation gets.

He alludes to on the commentary (and points out in a blog entry) Clampett's propensity for throwing in dirty jokes, such as having Daffy's beak morph into a sideways pudenda for occasional frames that, within the deluge of the consistently wild drawings, the naked eye is unable to register. The character design is not limited to a strict model sheet, with proportions constantly altering - this is perhaps the most notable derivation in Kricfalusi's own work, and to me one of the most endearing.
By going to the other extreme, we can observe the later 'grown-up' Daffy in the 1953 masterpiece (in no uncertain terms) 'Duck Amuck'. This cartoon is a character study in itself, with Daffy the only actor to appear until the oft-plagiarised ending. Growing increasingly frustrated as the cartoon's animator headfucks him constantly, we see the full gamut of emotion and acting in Chuck Jones's incarnation of Daffy. It is a very different beast to Bob Clampett's - even when he loses his rag completely it is with a kind of disciplined lunacy, (comparitively) conforming to a proportioned design.

While some may consider this restricting, it has always struck me that by reigning in the levels of visual absurdity a notch there is less of a likelihood that the audience will be lost. Unless you're an animation devotee like John K. - or if you have a short, infantile attention span like myself - too many convoluted, rapid-fire visual gags can get overwhelming.
To me, the genius of Chuck Jones's take on the Looney Tunes ensemble is the subtlety of the acting. Tiny eye expressions, little sniffs, grimaces, twitches, gesticulations and so on - all done so brilliantly and naturalistically that they are almost subliminal. The look on Daffy's face when he reaches his breaking point is so reserved, yet completely expresses that oh-so-relatable, end-of-one's-tether, borderline psychosis. You know in that look that you're in the eye of the storm, and that very soon the shit will hit the fan. Who here hasn't had a coworker who just fuckin' lost it one day? I imagine it happens with some frequency in the animation industry.
But we don't just see Daffy as an illogical psycho. At several points toward the start of the film he's in good spirits, and these more jovial moments are just as superbly portrayed with the same degree of subtlety. It's the constant poking, prodding and general antagonising on the part of the faceless pencil/paintbrush wielder that incrementally drives him to the edge.
So how is this relatable to my film? Well, apart from the duck connection (I have gleaned an awful lot of research in regards to lip-synching a beak, although I'll try not to throw in those Clampett-esque mouth vaginas) I think that by having two extremes represented by a single character may help with working out what my own visual approach may be. My lack of strict artistic knowledge would see me veer toward the free, unrestricted, loose style, while my amateur status as an animator may automatically restrict what I can do in the time provided, so my character acting may simply wind up as subtle by proxy. We shall see...

Posted by Struwwelpeter at 08:54

This is a gem

First off ! You don't insult Donald Fauntelroy Duck ! He's as great as Daffy (even though he's more of the ego while Daffy is an unleashed Id )& can actually become an illogical psycho when pushed around (How many performers actually SHOOT their audience when they are ticked ? Donald sure as hell does !).
Segundo , I love your piece , but for me Clampett's & Jones Daffy are the same duck . Jones 's is the craziest , It's easy to yell hoohoohoo while jumping around, but to be a litteral unleashed id who does not think twice about his impulses & has an unreleting stuborness is taking madness to a whole new level . Here's one I did, hope you'll like it !