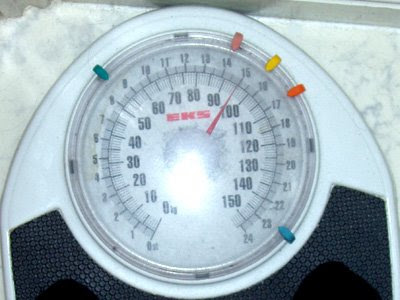 Well, I did it. I leave for the Download Festival tomorrow and I weigh in at 95kg, bang on target. Given that I shamelessly wolfed down giant portions of roti canai and crispy chilli beef at the HK Diner (best fuckin' restaurant in the city) last night, once that's out of my system it's possible that I may even have beat my target a little bit. But taking presumption out of the equation, it still means that in the last three and a half months I've lost a little over 9kg, which comes to about 20lbs. I'd be proud if I weren't so damn hungry.
So, to see if this adventure had any visible consequences, I put on the old t-shirt that clung to me so tightly back in march. Y'know, the 'symbolic' Faith No More/Ben of 1997 t-shirt. Well, I think the difference shows... 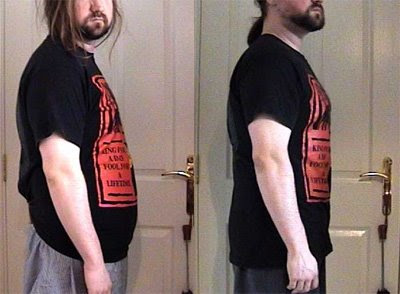 Not only does it fit, there's even some slack from where the shirt hangs off my moobs (still there, the perky little fuckers). There's just one problem, one which I somehow hadn't acknowledged until now.
This shirt sucks. 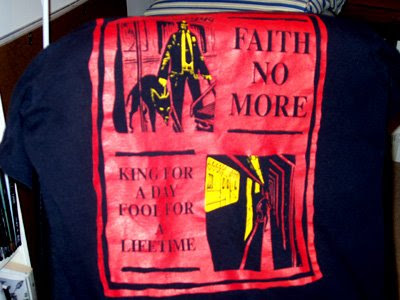 The layout's clunky, the colour scheme is off and the typeface is all wrong. Methinks it may have been a bootleg job. What luck, then, that the band have brought out new reunion tour shirts! Sneaky fuckers.
Apparel issues aside, I'm giddy at the prospect of seeing Faith No More live in two days. In truth I won't fully believe it's really happening until I see them onstage with my own eyes. This really is one of life's big deals. It may even knock losing my virginity off the top spot (no offense Anna, wherever you are - let's face facts, it wasn't a shining moment for either of us).
I will come back a changed man. Maybe I'll even be motivated to lose another 20lbs over the next three months...
Posted by Struwwelpeter at 09:23