The Day The Music (Mercifully) Died 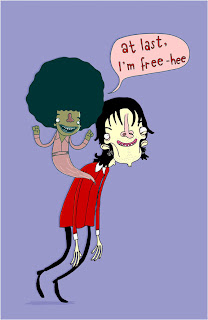 Sick yet strangely heartwarming illustration by Seb Burnett.
Well, I'm undeniably gutted about ol' Wacko Jacko, even though Michael Jackson the performer died a long time ago. I would honestly say that 'Thriller' was one of the LPs that inspired me to get into music. In fact, next to Faith No More's 'Angel Dust' I've always considered it to be the best album of all time. I suppose that in terms of sales the music industry saw it the same way, but being at the top of the charts rarely means the music itself is any good. 'Thriller' was the true exception of its day.
My musical 'career' is, being brutally honest, a glorified hobby. I, like gajillions of others these days, produce and release my own music online, relying primarily on word-of-mouth for promotion. Sales are extremely modest (my biggest selling album to date, 'Agnosticaust', has shifted just under 2000 copies, which would be a catastrophic failure if I was signed) but with no middleman and a whole heap of associated merchandise, the supplemental income has helped me out frequently. If I pursue music as a legitimate career in the long run, realistically it'd be as a film composer, having developed a fondness for the process over the last year. In the meantime my little indie records will continue to be pretty much for me, my friends and the small handful of lovely, lovely folks who seem to dig them.
After some introspection since last night's news, however, I've decided to retire a sizable chunk of my back catalog. While I will always love these CDs, it's the love a parent has for their screwup, ugly children - one that isn't shared by the general public. When they were released they were received well, but that was largely due to the appeal of the digital music era, then in its infancy. This was before MySpace and iTunes, when selling and distributing your music online was a novelty, and audiences were far more forgiving if the production values were shaky. Nowadays I feel that, save for a few tracks on each, the albums I worked on from 1999 to 2003 don't stand up to the state of the digital music scene today, and that sales for each have slowed to a trickle confirms this in my mind.
So, with no particular heaviness in my heart, I bid farewell to the online availability of:

I also worked on a romance (well, sex) themed trilogy of jazz albums, which never really caused much of a ripple. So to these I also bid adieu:

Both sets of albums had respective anthology releases, and these I won't rescind just yet. They always sold better and still continue to show up on royalty invoices, plus by filtering out the vast quantities of filler material they make for far better listening experiences:

I'm also happy to keep everything I've put out since adopting the moniker Struwwelpeter as these always stood apart from prior releases in terms of production, quality of songwriting and sales. Maybe when my next musical idol (yes, Michael Jackson was an idol - remember, he was acquitted) pops his or her clogs I'll retire these as well, but hopefully that won't be for a long time.
So, Mike Patton, Tori Amos, Les Claypool, Brad Roberts, Alanis Morissette, John Zorn and Tom Waits - be careful. I need you all alive and in one piece.
Posted by Struwwelpeter at 13:56