I've just come back from two days in hospital having my throat mercilessly raped by an angry blue whale sporting a prophylactic woven from razor wire. Well, that's what it feels like. Actually it was a procedure that may go a long way toward keeping me alive in the long run so I should probably be feeling more upbeat about it than I am. Well heck, at least they gave me all this lovely codeine.
As a side-effect of my esophageal blues (if that isn't a Tom Waits album title it should be) I had a lot of free time on my hands yesterday and began cleaning up an old, dusty short comic I wrote back in 2005. I was originally going to include it in a collection of similarly distasteful tales called 'That Isn't Funny, You Stupid Child' the following year, but I felt the end result was too inappropriate even by my standards. 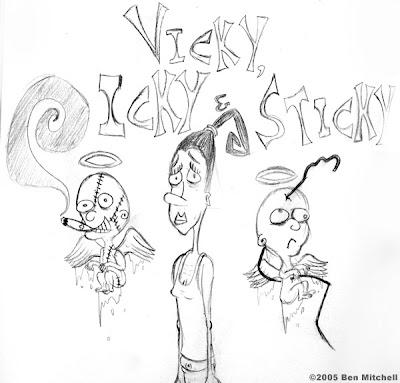 Looking at it again after several years, it's an odd exercise in catharsis involving my conflicted issues toward the pornographic industry, reality TV and Frank Capra (it's kinda like my version of 'It's A Wonderful Life'). Anyhoo, it's called 'Vicky, Icky & Sticky', it's awful and disgusting but it does have some funny bits. Frankly I feel that I'm afforded my gallows humour after the last couple days. When I finish the clean-up I'll either bung it on here as a free Xmas treat or throw it into the planned full-colour reissue of 'That Isn't Funny...'. Or both. Probably both. 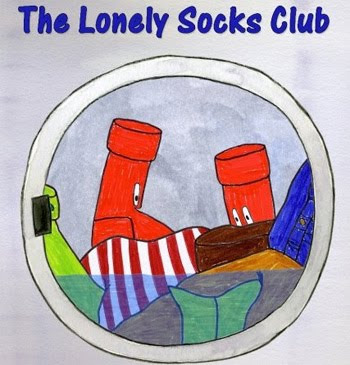 On completely the other end of the cartoon spectrum, I'm happy to say that my friend Veronika Broscheid's short children's film 'The Lonely Socks Club' is making it's festival debut at the Falstaff International Film Festival in Stratford-Upon-Avon on the 20th. I wrote the music for it and am happy to have my name attached to such a genuinely pleasant film, especially considering that the stuff I come up with on my own is so abhorrent (yes, Icky and Sticky are aborted foetus angels - is it any wonder I've been blighted by illness?). I need that element of balance.
Anway, her film plays as part of the Closing Strand from 2:30pm at the Civic Hall, along with another great film 'The Legend of Geb & Nut' by her MA coursemate Laura Ratta.

Also, 'House Guest' is playing at Estonia's 'Animated Dreams' festival on Wednesday 18th, in the 'Best of International Student Animation' section starting at 8pm EET. The festival screenings take place at the Cinema Sõprus in Tallinn. Hurraahüüe!
Posted by Struwwelpeter at 13:19