It's my third day at ITFS and, not surprisingly, it friggin' rules. I've already met some personal heroes, seen some spectacular films and remained staggeringly abstemious, food-wise. Which is a miracle, given that all they seem to serve in this country is cake and sausage.
As cool as it was to have "The Naughty List" shown, the really amazing part of the festival so far was actually the very first thing I got to do when I arrived and, given that I hadn't slept at all in the preceding thirty-six hours I'm not entirely sure it wasn't just a dream. If when I get home it turns out it was real then I'll be putting it up here before you can say 'Ben, you attention-hungry, uneven-bearded nobody'. 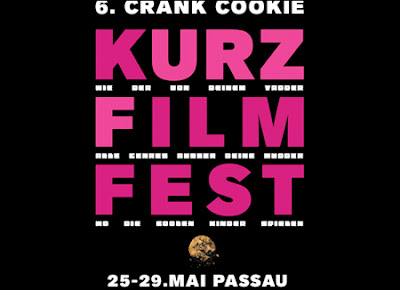 Back to "The Naughty List", I just learned that its latest festival inclusion will be the Crank Cookie Short Film Festival, which could be the greatest one yet by name alone. It's also based in Passau which will make it the fifth German festival to show the film to date. These Germans, they sure do love that Santa Claus. And cake. And sausage.
Well, I should wrap up as I'm typing this entry on a tablet in the park with my legs crossed and as a consequence my genitals have fallen asleep. It's a fat guy thing. So as not to go out entirely on that disconcertingly-candid thought, here are some of my festival favourites so far: