The whimsical sleigh ride that is "The Naughty List"'s festival tour makes two further stops this coming September. The TriMedia Film Festival in Fort Collins CO, USA will be held between the 9th and the 11th, though they haven't yet posted the program so I'm not sure exactly when my film's playing.

In Sydney it will be part of the Auburn International Film Festival for Children and Young Adults which tours the region from the 19th to the 23rd. It's nice to get some exposure at a festival aimed toward a younger audience, as this is my only 'family friendly' film to date I was sort of hoping it would get into more kids' festivals, which hasn't really turned out to be the case. Maybe if Santa had been wearing pants... 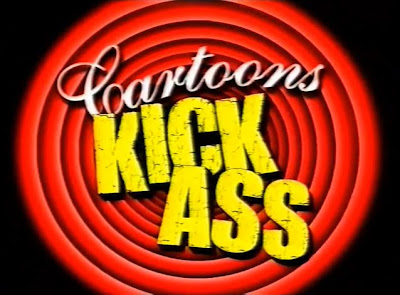 On the subject of unsavoury animation, I've been transferring some old VHS tapes onto my hard drive and came across this pretty interesting documentary from 2000. It's called "Cartoons Kick Ass" and focuses on adult content in cartoons going all the way back to the dawn of animation, featuring contributions from Jerry Beck, Mike Judge, Paul Wells, John Kricfalusi and Ralph Bakshi to name a few. When it originally aired this was my introduction to stuff like the Censored Eleven, cartoons as a propaganda tool, antiquated racial stereotyping that modern society has 1984'd out of existence, submlinal/not-so-subliminal insertions of dirty jokes into animation and the alarmingly fatuous anti-animation agenda of conservative Christian groups. It aired on Channel 4 so it may get taken down but as it's A) really interesting, B) unavailable commercially to my knowledge, and C) impossible to find online (it isn't even on IMDB), do me a favour and don't be a fucking narc about it. Just enjoy it and pass it on.


Ending on a random note, I was playing American McGee's visually brilliant "Alice: Madness Returns" and spotted this piece of bizarrely coincidental set dressing which served as a pretty funny WTF moment. Not that it really warrants clarification, but mine's the one on the right :P 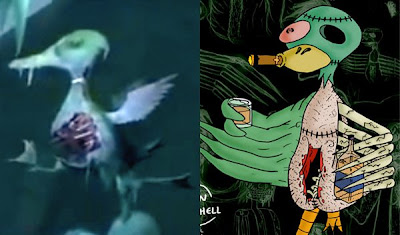 Posted by Struwwelpeter at 05:17