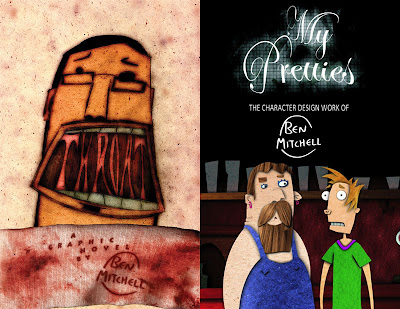 Just in time to hopefully not be too late for Christmas, December 5th is now marked as the official joint release date for my next two books. “My Pretties” is a non-narrative illustration book in the vein of last year’s “Brain Spillage”, this time a full-colour showcase of my character design work over recent years. Its focus is naturally on the projects I’ve taken on since starting out on my animation career, with some early toothcutting endeavours thrown in. “Throat”, which I’ve talked about previously, is my first graphic novel to not be an adaptation or anthology. It’s been a not-so-smooth ride, going on intuition and very little by way of guidance, but after a last minute rewrite I’m really happy with how it’s turned out. There’s the usual dark elements and weird, goofy shit I guess I’m associated with at this point, but it also goes to some places a little more personal and introspective. “Maus” it definitely ain’t, but I’m proud of it all the same.

Film news, another upcoming October screening for “The Naughty List” will be at the “Golden Kuker – Sofia” International Animation Film Festival in Bulgaria, alongside some pretty fine films by the likes of Joost Lieuwma, Dmitry Geller, David O’Reilly, Brothers Quay, Grant Orchard, Martin Wallner and Stefan Leuchtenberg. There are lots more, of course, but those fellas in particular I’m a bit of a fan of, so worth a shout-out. The film’ll be shown as part of the Made For Kids competition screening on Saturday October 1st at the Arena West cinema, full programme here.

Other confirmed “Naughty List” festival screening times: A week tomorrow (the 24th) it’s being played in the Pyrenees International Short Film Festival Sintetitza’s Animation section from 5pm at the Catalunya Cinema in Berga.
At the multi-regional Shnit International Shortfilmfestival it is in the “Shnit Animates 1” screening, showing at 9pm Friday October 7th and 5pm the following Sunday (9th). I’m not sure if this is the same schedule for all the countries but those are the official times for the Berne edition (Venue for both screenings is the Kino City II).

Finally, my Animation MA coursemate Kate has put together an animation showcase that will be part of SAW’s Art Weeks ’11 visual arts festival in Somerset. My first film “House Guest” will be included as part of the daily programme (around 12:25pm) as well as work by such fellow UWE-ites as Laura Ratta, Lucia Morgan, Mark Simon Hewis, Dominique Bongers, and Mel Peck, along with some classic shorts from established directors. The Art Weeks make for a pretty giant event with lots of stuff on for the artistically inclined and goes from tomorrow up to October 2nd, so if you’re trotting about those parts drop in to The Old School and watch yourself some fine toonage. More info at the event website.
Posted by Struwwelpeter at 16:56