Another forthcoming screening for "Ground Running" has been confirmed, Serbia's Belgrade Documentary & Short Film Festival which takes place from March 30th to April 3rd, full programme to follow. The festival was kind enough to show my debut film "House Guest" for their 2010 edition so it's very nice to be included in their line-up again. 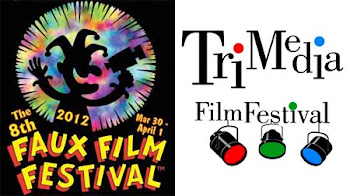 As well as being broadcast tomorrow afternoon in Spain, "The Naughty List" is being shown as part of the TriMedia Festival (in which it participated last year) Fundraiser Series, beginning on March 17th at the Rialto Theatre in Loveland CO, USA.
The film will get another rare US outing later on that month, on Friday 30th, 7pm at the Clinton St. Theatre for Portland OR's Faux Film Festival, which looks to be a fun gathering of similarly auteur-stic filmage. Thank you, film festival people, the exposure is of course always much appreciated!
Righto, back into the rabbit hole I go.
Posted by Struwwelpeter at 07:25