Just a heads-up to any Bristolians who might find themselves in my neck of the woods: Keep your eyes peeled for any BT Homehubs that might fall from the sky and brain you, for I’m alarmingly close to chucking mine off my fourth-floor balcony with a previously-undisplayed athletic strength only made possible through being driven to the absolute edge.
After a 36 hour Mexican standoff wherein the crafty plastic s***head would choose to drop my broadband signal only at moments when I absolutely needed it, we seem to have come to some sort of understanding and it’s now being good. But any more shenanigans and the little bastard gets its first and only flying lesson while I use my free hand to call up Sky and switch services. 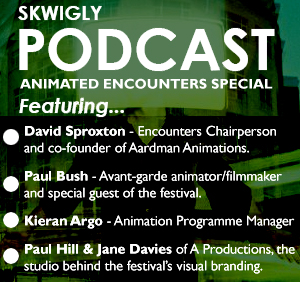 All this is a rather long-winded and excuse-laden lead-up to announcing that our latest Skwigly podcast special on Bristol’s Animated Encounters is now finally up. While nobody seems too miffed about the delays, a recent surge in audience numbers (hooray!) has put an added pressure on the future of said podcast, and we’re currently working out a way to make the process more consistent and audience friendly; Ideally we’d do two one-hour episodes a month rather than one massive two-hour chunk that leaves people hanging for 4-6 weeks at a time. There’s fine-tuning to be done, but we’re getting there slowly.
In the meantime you should probably get comfortable ‘cause this one comes in at over two-and-a-quarter hours. Granted there’s a lot of ground to cover, my enthusiasm for the festival and the many talents associated with it seeing me amass a lot of material. Not least of which is my own warbling self waxing-asskissey about all the festival highlights. As it turns out I enjoy talking about stuff I like more than stuff I hate. I know, right? I’m as surprised as anyone.

I also got to interview my lovely friends Paul and Jane of A Productions on producing the animated visual branding for the festival each year, as well as animation programmer Kieran Argo and this edition’s special guest Paul Bush, a man who, despite firmly residing on the artistic end of the animation spectrum (while I, as is obvious by now, am still at the coyotes-falling-off-cliffs end) was very down-to-Earth and a sincere pleasure to chat to.
With fortuitous timing playing a big hand I also got to interview David Sproxton, chairman of the festival and Aardman producer/co-founder (along with Nick Park and Peter Lord, who I also got to talk to back in March for episode one). While the podcast edit of the interview focuses on Mr. Sproxton’s involvement with Encounters itself, there’s an upcoming written piece that I expect will be a little broader and Aardman-ey, so stay tuned for that one. Good stuff indeed.
As usual you can stream it below or download it for later. Of course, if you want to subscribe on iTunes and possibly even give us a rating/review that’d be golden delicious of you!
Skwigly Podcast Special 02 - Animated Encounters (11/10/2012) by Skwigly Animation Podcast

On a final note, this has nothing to do with anything, it just made me very happy tonight: 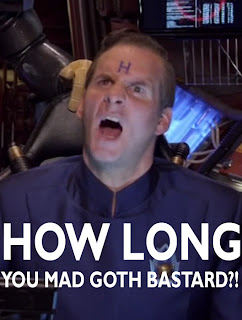 Posted by Struwwelpeter at 18:34