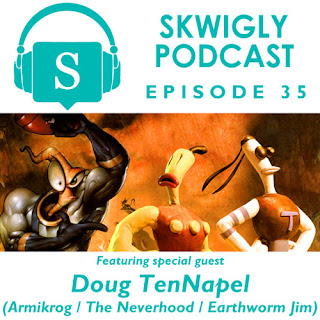 In the latest episode of the Skwigly Animation Podcast I'm very happy to present an extended version of the previously-discussed interview with animator, artist, graphic novelist and video game designer Doug TenNapel. On top of his current ongoing projects such as the Dreamworks/Netflix series VeggieTales In The House and the ongoing comics series Nnewts, this past week has seen the release of his latest and much-anticipated new video game project Armikrog. Capturing the charm, masterful animation and appealing zaniness of Doug’s earlier work with such video game classics as the Earthworm Jim and Neverhood series, Armikrog brings together an established team of talents including Mike Dietz and Ed Schofield of Pencil Test Studios, composer Terry Scott Taylor along with voiceover artists Michael J. Nelson and Rob Paulsen.
Also discussed in this episode is the first wave of officially announced Manchester Animation Festival events, including special screenings, masterclasses, panel discussions, workshops and an impressive array of guests.
Stream the latest episode above, direct download or subscribe on the ol' iTunes!
Posted by Struwwelpeter at 06:07