It's been a particularly busy week over in Skwiglyville, with highlights including Katie's interviews with voice actor Jeremy Shada of Adventure Time fame and Jackson Publick, creator of the longest-running Adult Swim series The Venture Bros. Plus migraine-riddled worrywart Dani recounts her bank holiday weekend spent devoted to making an animated short from scratch and Laura-Beth interviews the team at MewLab about their ambitious installation-cum-short The Evening Her Mind Jumped Out of Her Head (which some of you may have seen at our MAF screening last year).
Meanwhile my Lightbox video interview series has kicked off again, featuring a chat with Job Roggeveen and Joris Oprins; two thirds of Job, Joris and Marieke, the Oscar-nominated studio who've made such fantastic work as MUTE, A Single Life and their latest, (Otto). You can hear from remaining team member Marieke Blaauw in our recent KLIK! Podcast minisode. 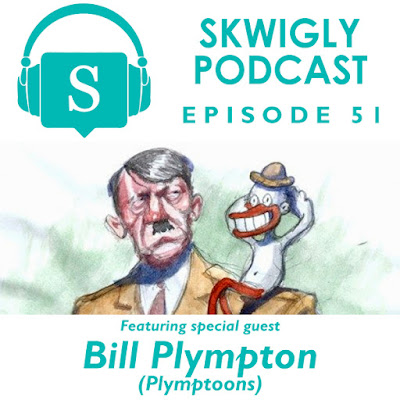 On the subject of podcasts, we've officially barrelled past the fifty-episode mark and are pleased to welcome back the legendary Bill Plympton, whose divisive (the LA Times call it one of his "most entertaining feature films", the AV Club call it "fundamentally misconceived") new film Hitler's Folly is free to stream from his website as of today. We also chat about other projects including Revengeance, the next fully-animated feature he has lined-up, a collaboration with kindred spirit Jim Lujan. As I've doubtless mentioned before, I credit Bill with my decision to shift my attentions from motion graphics to character animation and storytelling and am always stunned by just how prolific he is (he's like the Mike Patton of animation), so it's always a privilege to feature him on the show. Stream below, download here or subscribe for future listenin'!
Another crucial influence at a key stage in my animation studies was legendary Czech surrealist filmmaker Jan Švankmajer, whose gloriously bizarre work embraces animation's full potential and often tows the line between comedic and nightmarish (an interplay I have a particular fondness for). As such I'm beyond thrilled to have gotten an interview with the man himself, which is up today. This was no easy feat with the language barrier - to the best of my awareness his English is only marginally better than my Czech - so I'm hugely grateful to him and his team for taking the time with their translation efforts.
In the interview we mainly discuss what he has declared to be his final feature film Insects, which he is presently crowdfunding. It looks to be an absolutely wonderful endeavour that embraces everything I love most about his work and process, I hugely advise you all to give it a look and help it become a reality!
Posted by Struwwelpeter at 03:07