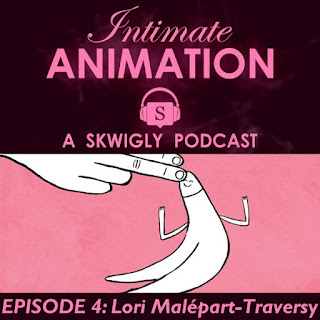 In the latest episode of our Intimate Animation podcast Laura-Beth and I meet award-winning Concordia graduate filmmaker Lori Malépart-Traversy, whose student short Le Clitoris has generated a great deal of buzz since it premiered in June of this year.  The film uses traditional 2D animation techniques to tell the story of the oft-misunderstood clitoris and how its standing in society has changed over the centuries, from the patriarchal attitudes of the Catholic Church to the dismissive theories of its ‘Enemy Number 1’ Sigmund Freud.
Having won the Audience Award at Womanimation! and Best International Student Short Film at Animasivo, the film’s ongoing festival run includes showings at Ottawa, Anima Syros, KROK, FAFF, Anim’est and the TIAS Animation Showcase, with upcoming screenings at Anima Mundi, KLIK! Amsterdam Animation Festival, DOK Leipzig and Sommets du cinéma d’animation.
Subscribe, direct download or stream below:
Posted by Struwwelpeter at 06:41