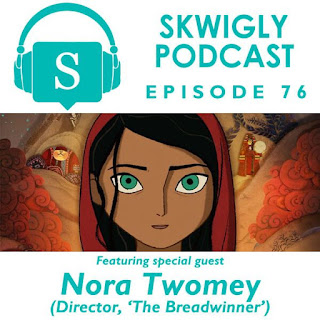 For episode 76 of the Skwigly Animation Podcast I was thrilled to speak with Cartoon Saloon co-founder Nora Twomey, director of the animated feature film adaptation of Deborah Ellis’s The Breadwinner that just got itself an Oscar nomination.
Fulfilling a variety of key roles at the studio, Nora’s has served as Creative Director on projects such as preschool series Puffin Rock, as well as co-directing the 2009 feature The Secret of Kells alongside co-founder Tomm Moore, directing the short films From Darkness (2002) and Cúilín Dualach (2004) and serving as Head of Story on Song Of The Sea (2014).
Having received its world premiere at the Toronto International Film Festival last September, The Breadwinner has gone on to receive a Golden Globe nomination and multiple nominations for the Annie Awards and the Canadian Screen Awards, winning Best Animation at the Los Angeles Film Critics Association Awards, the Toronto Film Critics Association Awards and Leeds International Film Festival.
Also discussed in this episode: A look at the other animated Academy Award contenders, BAFTA nominations and early impressions of Aardman's Early Man,  Stream this episode below or direct download:
Posted by Struwwelpeter at 14:34