If they call you 'butt' over there it means they like you, I recently learned 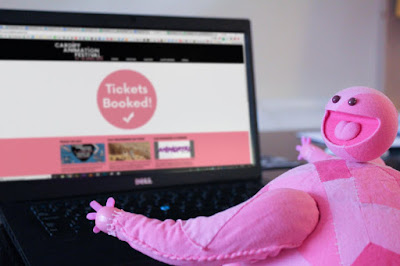 It's Friday! We made it to the end of another week! Go us!
That means there's now a mere six days to go before Cardiff Animation Festival kicks off and I'm very excited to be heading over there alongside Skwigly brethren and animationey pals alike.
There's a packed schedule of amazing events from Thursday 19th through to Sunday 22nd and while it's worth taking the time to peruse the full programme here are a couple I'm involved with:
As part of the Industry Day on the 19th I'll be on the 2pm panel Getting To Market with Helen Brunsdon, Adam Bailey and Huw Walters where we'll be discussing "the fine art of promoting and selling your work, from TV ideas to short films, at markets around the world". You can pick up an Industry Day pass here if you've not done so already.
On Saturday 21st I'll be chairing the Q&A session Making Isle of Dogs at 8:45pm, which will directly follow a 6:30pm screening of the film itself. This will be a great opportunity to learn about the crafting of the exceptional new Wes Anderson film from artists Joshua Flynn (puppetmaker), Kim Keukeleire (lead animator) and Kerry Dyer (puppet repairs), so you won't want to miss it.
I'll also be speaking with some of the attending filmmakers in competition for the Animator's Brunch Q&A sessions that will take place on the 21st and 22nd at 10:30am. Not only will you be able to meet/grill these splendid folks but you'll get to do so with coffee and croissants to hand - plus both sessions are free to attend, so treat yisselfs! 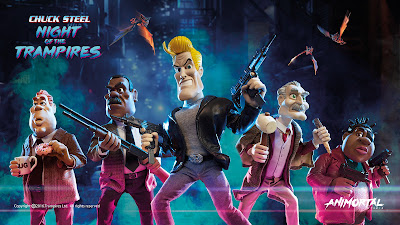 Other festival highlights you'll want to check out include a festival-long exhibition and Friday night special presentation for Chuck Steel: Night of the Trampires, the spectacular stop-mo feature I contributed some VFX bits to last summer, as well as a talk by all-around top bloke Grant "Hey Duggee" Orchard, a writing for animation panel, the official launch of Anim18, life drawing, a Bring Your Own Animation session (at which I may attempt a sneaky preview of my latest film Sunscapades), screenings and Q&As for recent features Early Man and The Breadwinner - not to mention a heap of parties and networking events you can get sauced at. Then there's the official selection itself, which as a member of the jury I can assuredly say is packed full of absolutely top-shelf work. Say hello* if you're there!
*Not an obligation. In fact an across-the-room-half-nod is already above and beyond.
Posted by Struwwelpeter at 05:18