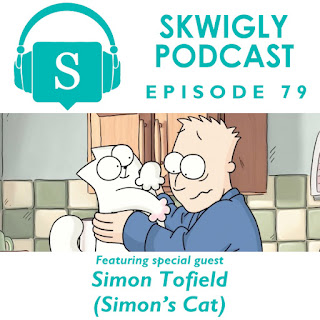 Our latest podcast is a little more heavygoing than most, what with there being a certain big, creepy, Canadian elephant in the room. It's probably been hard to miss the aftermath of Ariane Lange, Katie Rice and Robyn Byrd's speaking out against John Kricfalusi, and while a fair few folks have been asking me about my thoughts on the matter, Ren and Stimpy enthusiast that I've been over the decades, I haven't had a whole lot to add to the discussion that doesn't merely echo the same mix of disappointment and sadness that so many others in the animation community are feeling. That being said, this podcast has grown over the years into a platform to spread awareness about key issues that we hope said community can rely on as well as being, as Steve puts it, "therapy for the both of us", so for those who are curious about where we stand it's pretty much all in there. Even more stuff has come out since the episode was recorded, so I have a feeling this saga is far from over.

Thank you @skwigly! This shouldn't be something women have to say, but... Thank you for believing us. https://t.co/hewjs9UrkT
— Robyn Byrd (@TopographicFish) April 5, 2018

To lighten the mood some we were able to include Steve's excellent recent chat with Simon Tofield, creator of the indie-animation-turned-merchandisable-behemoth Simon’s Cat, recorded during last month's tenth anniversary celebrations. We also give YouTube's ‘Copyright School’ a deserved smashing and go through some upcoming Cardiff Animation Festival highlights. As always you can direct download or stream below:
Posted by Struwwelpeter at 09:20