"No more singing a cappella..."

I'm really pleased to say that recently I had the privilege of being involved in a very nifty mass collaboration for Plymptoons. As I'm a huge Bill Plympton fan you can appreciate that this was something of a dream opportunity and a great excuse to familiarise myself with lots of incredibly talented animators.

The project is "Guard Dog Global Jam", a multi-animator shot-by-shot re-imagining of one of Plympton's best shorts, the Oscar-nominated "Guard Dog". Of the chosen applicants, each animator was assigned a shot to reproduce. Mine was a quick cutaway of a mouth gearing up to sneeze. 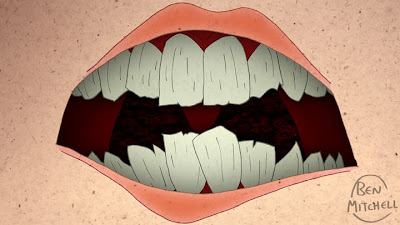 As it was only two seconds I decided to do it on ones (24 frames-per-second as opposed to 12, which is what I usually stick with). The fluidity of movement is really appealing, almost to the point where I'm considering having my next film be an entirely on-ones affair. Composition-wise, the shot combines full animation (the lips) with tweened animation (the teeth), the throat being the background. Here's a quick vid of the various stages, beginning with the original shot as animated by Plympton, then the line test, coloured mouth animation, teeth animation and finally the fully composited shot:
I was also able to jump on board Mike Schneider's incredibly ambitious flicker-frame concept in which a different illustrator tackles each individual frame of his allocated shot. 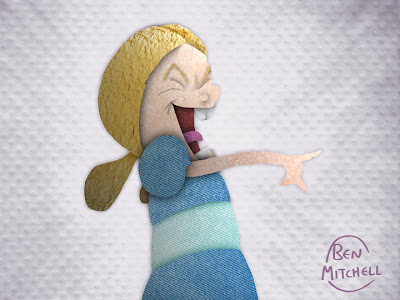 Mine simply resorted to the fabric-texture-with-relief-shadow look I've been pulling out a lot lately, most notably with the Channel 4 project last spring. It's kind of practice for the ever-growing Struwwelpeter music video I'm still working on. Here are some other, more visually adventurous takes on it by some of the other illustrators: 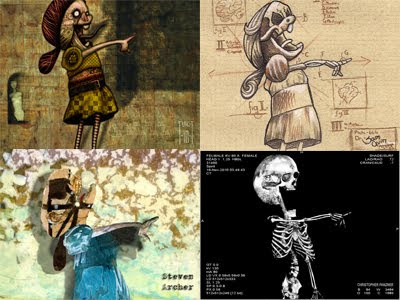 The choking mouth of the first shot is coincidentally apt when considering my ongoing graphic novel project "Throat", the next progress update for which I'll save another entry, however for similarities sake I thought I'd throw up the finalised cover design: 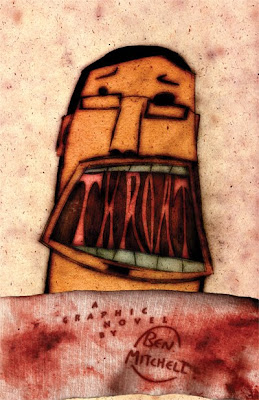 The main artwork has been posted before, but the added bandage/subtitle came from smearing an Ace bandage with hot chocolate mix, blending/warping/blurring the typography to match it and then tweaking the colour to make it look like blood (trust me, it's a far more distressing visual when it's smeared brown). Hopefully it represents the story well, sort of a mix of goofy and grim.
Back to "Guard Dog", I'll leave you with an animatic (consisting of concepts and the odd finished shot) that was recently uploaded to give a preview of the wide range of styles used:
Posted by Struwwelpeter at 15:39

You'll want to add a facebook button to your blog. I just bookmarked this article, although I had to complete it manually. Simply my $.02 :)