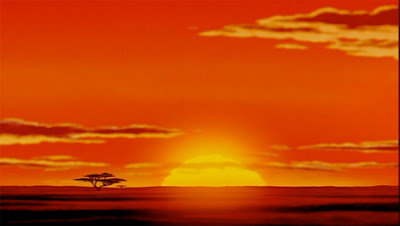 Today is a glorious day - for my life, my career and my emotional maturity as an adult. A couple weeks back I made the life-altering decision to adopt a li'l Estonian bundle o' joy. She was being neglected in her home country and, frankly, needed a more nurturing environment where she could be raised with the love and attention she deserved. Things didn't run as smoothly as hoped - multiple delays and red tape presented themselves, accompanied by much anxiety. For nearly an entire week she was being held by the British government before being released to me. It was a trying time for us both, I'm sure.
This weekend the bond of familial love won out and we're now together forever. Here's a pic - I've decided to call her Cindi: 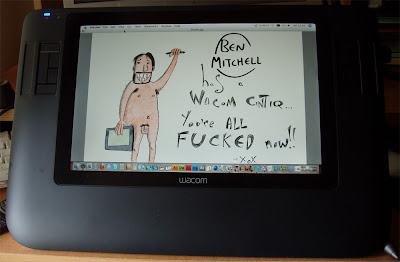 Sure milked that analogy dry, didn't I?
That's right, lovelies. Blessed art me, FOR I AM WITH CINTIQ! It had to be done, my desire to continue to produce traditional animation had been too long at odds with the back strain of...well, back strain. And endless hours spent cleaning, inking, scanning and re-cleaning each individual frame. Now I can do all that on the screen - the Cintiq essentially works like the world's most awesome Magna Doodle. Observe this classy product demonstration:
Predictably enough, the first thing I drew on it was my schwanz. What did you expect, a fucking sunset? This is me we're dealing with here.

So, while I abandon all hope of finishing any of the eight billion projects I have on the go right now in favour of a lifetime of technologically wondrous doodling, my now pathetically antiquated film "The Naughty List" which I made with (sneer, scoff, derisively snort) pencils and paper has been snapped up for the 2011 edition of the Film Sharing Lo/No Budget Film Festival Tour, which will see it screened at various times/dates/locations throughout Germany from July to September. "Ground Running" was part of the 2009 tour so it's very cool to be involved again. I especially like the way my film is represented on the front of the program, flanked by a pair of bare boobies and a pair of gouged-out eyeballs respectively. Makes sense to me - tits, Christmas, gore - pretty natural grouping there.

The usual info is up and online at their website if you want to see if the tour makes it anywhere near you. Assuming you're in Germany to begin with.
Posted by Struwwelpeter at 12:05