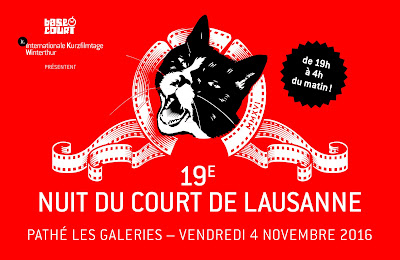 It's been a long journey, but this Friday November 4th will be the final stop of the Nuit du Court Métrage leg of Short Film Nights, the touring programme that has graciously included Klementhro, seeing the film screened throughout Switzerland over the course of this year. The twenty-third and final city on what's been a terrific tour with some brilliant and much-appreciated exposure will be Lausanne, the screening itself taking place at the Pathé les Galeries at 7:25pm. Many thanks again to the Short Film Nights team for bringing my bizarre little film along for the ride!

On Saturday November 5th the film will see its Chinese premiere at the KuanDu International Animation Festival in Taiwan. It will be screening in the programme KDIAF's Choice 5 for a relatively early (9am) start. It's another interesting crop I'm very happy and humbled to be amongst, with work from some great artists including Kim Noce, Shaun Clark and Isabelle Favez among others.

On those exact same dates the film will doubtless be befuddling Brazilians over at Anima Mundi. Following the first batch of screenings that took place in Rio de Janeiro, the second wave will be in São Paulo with two screenings at the Cinemateca Brasileira. On November 4th it'll screen at 6pm in the Sala Petrobras, with a 3pm screening in the Sala BNDES the following day.
Tchau for now!
Posted by Struwwelpeter at 03:32