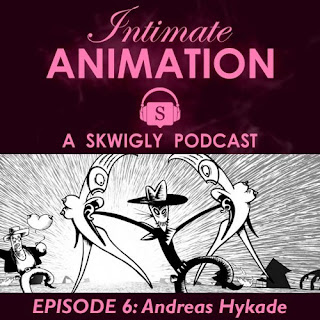 Today sees the conclusion of the first season of Intimate Animation, the podcast in which Laura-Beth and myself have been dissecting animation's more lovey-dovey side. Well, mainly we've been talking about animated genitals, but the lovey-doveyness gets a look in every once in a while.
In episode 6 we end things on a bang (I apologise) with the great Andreas Hykade, whose filmography includes the multi-award-winning shorts The Runt (2005), Love and Theft (2010) and Nuggets (2015) as well as the children’s series Tom, produced in association with esteemed German studio Film Bilder. Prominently discussed in this episode is the director’s intense and hallucinatory Western opus Ring of Fire (2000), whose themes of relationships, sexuality and conflict were drawn from his own life. The film would go on to win Best Animated Short at several major festivals including that year’s Ottawa International Animation Festival. As always feel free to either direct download or stream below:
Also discussed in this episode – the threat of tightening UK censorship laws on depictions of ‘non-conventional’ sexuality, Studio Pupil‘s delightful short Tabook (one of my personal favourites from MAF last week) and the bizarrely compelling visuals of Genital Jousting from Free Lives.
Thanks very much to everyone who's supported this new venture, it's proved to be a very valuable extension of the animation conversation Skwigly has endeavoured to keep alive and we're already excited about season 2 next year. We'll be bringing you two other new themed podcasts over the next month or so that I hope will prove to do likewise, in the meantime however if you missed any of the first season of Intimate Animation you can listen to every episode in our handy playlist:

Posted by Struwwelpeter at 09:44