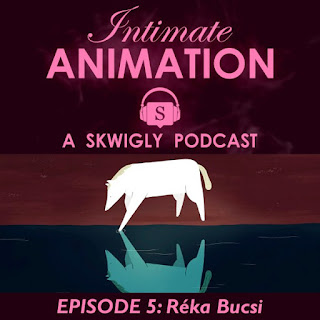 Mine and Laura-Beth's love'n'sex'n'stuff podcast series Intimate Animation continues today with episode 5, in which we meet Réka Bucsi, who has followed up her tremendous student short Symphony No. 42 with the multi-award-winning Love.
Produced in association with Passion Paris, Boddah and The Animation Workshop, the film premiered at the 66th Berlinale Shorts Competition to immediate acclaim, going on to screen at other prominent festivals including the Ottawa International Animation Festival, AFI Fest, Go Short, Melbourne International Film Festival and the BFI London Film Festival. Manchester Animation Festival passholders will also be able to see the film as part of our Skwigly Screening (alongside Lori Malépart-Traversy’s Le Clitoris, featured in episode 4) later this month - I'll be elaborating on what else will be on offer soon. More recently Love earned a European Film Award nomination at the Uppsala International Short Film Festival as well as being shortlisted for the Cartoon d’Or when it won Best European Short at 3D Wire.
Also discussed in this episode are the broader themes of ‘love’ – beyond romantic and sexual relationships – that animation has effectively tackled, from family fare such as The Nightmare Before Christmas to more challenging work as Ma Vie de Courgette and Mary and Max. Laura-Beth and I also have a special announcement for the benefit of any podcast listeners who haven't heard our recent and rather wonderful news elsewhere. Give it a stream above or a cheeky little direct download.
Posted by Struwwelpeter at 08:18