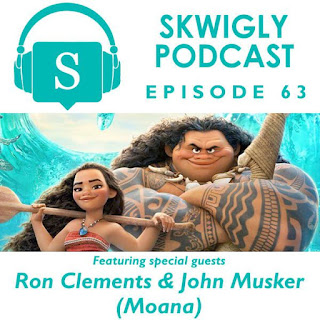 For our sixty-third episode of the Skwigly Animation Podcast we hear from directorial duo Ron Clements and John Musker – whose prior credits include the much-loved Disney features The Great Mouse Detective (1986), The Little Mermaid (1989), Aladdin (1992) and Hercules (1997), as well as the more recent 2D animation revival film The Princess and the Frog (2009) – about their latest film Moana, out now in cinemas.
Also discussed in this episode: Animation UK’s recent announcement at 10 Downing Street, highlights from the London International Animation Festival, the continued success of Claude Barras’s My Life as a Courgette/Zucchini, incurring the wrath of Hayao Miyazaki and the bad influence of a certain Quoanna Jinn. Give it a stream down below, you streaming little streamy streamersons:

Posted by Struwwelpeter at 13:52