This past Sunday marks the 40th anniversary of Aardman Animations, the Bristol-based industry powerhouse that gave the world Wallace and Gromit, Shaun the Sheep, Creature Comforts and Chicken Run, and that's just barely scratching the surface.
Our team at Skwigly have been paying tribute to the event by writing up some of their own perspectives and personal high-points. Laura-Beth rounds up the studio's own celebratory endeavours as well as picking her top ten shorts; Steve looks back at their various TV series; Wez Allard explores their back catalogue of inventive commercials; Rachel Crook recalls the construction of the Wallace and Gromit theme park ride and Marc Hendry gives some love to the studio's feature films. 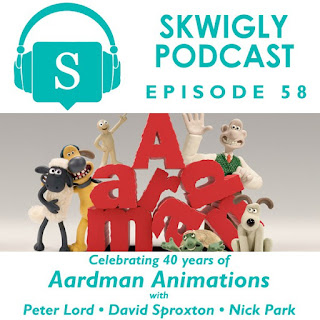 For this week's podcast we obviously wanted to pay similar respects, so on top of some fond remembrances of Raymond Briggs (and some overdue Sausage Party bashing) Steve and I wax nostalgic about all things Aardman, digging out interviews with the three studio heads Peter Lord, David Sproxton and, making his Skwigly Animation Podcast debut, Wallace and Gromit creator himself Nick Park! Cracking stuff. Give it a stream or a download, whichever puts more cheese on your cracker.
Also up on the site, Laura-Beth has a nice write-up of the recent Animation Super Grill event whose line-up I was a part of. I also have an interview with Regular Show alum Sean Szeles whose own animated miniseries Long Live the Royals has been showing on Cartoon Network UK this week. Meanwhile I've been pinging all over the place and, midst my travels, got to catch an advance screening of LAIKA's jaw-dropping new film Kubo and the Two Strings as well as meet its director Travis Knight. You can have a watch of our chat in the newest episode of Lightbox below:

Travis previously appeared on Skwigly while promoting The Boxtrolls but this was my first time meeting him. A truly impressive bunch, that LAIKA lot, so I implore you all to see this one in cinemas, you'll be glad you did.
Posted by Struwwelpeter at 10:26