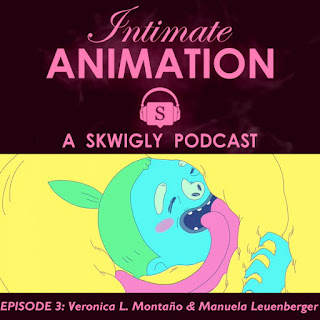 Following the previous episode featuring Anna Ginsburg on her film Private Parts, episode three of Intimate Animation effectively bookends the past week or so of Encounters coverage with a look at another Late Lounge entry. Laura-Beth and I got to have a lovely chat with attending filmmakers V Veronica L. Montaño and Manuela Leuenberger as the festival was winding down to talk a little bit more about their brilliant Lucerne School of Art and Design grad film Ivan’s Need. We previously heard from both of them (along with fellow filmmaker Lukas Suter, who wasn't at Encounters unfortunately) during the KLIK! Amsterdam Animation Festival last year but as it's a film that Laura-Beth and I both adore we were keen to chat a bit more about how it came to be.
Also discussed in this episode are more abstract animation approaches to themes of love and sex, including Réka Bucsi‘s beautifully-made new film Love and Grant Orchard‘s mograph microshort Yeah Just There. If you're not in a streaming mood here's the ol' download link for late-night listening.

On the significantly less saucy subject of Klementhro, there are two opportunities early in October to catch the film in Germany. Firstly this Sunday October 2nd it will play as part of the first Animation Competition screening at 4pm alongside some great work including Job, Joris and Marieke's A Single Life. The festival takes place at Paul-Wunderlich-Haus, if you fancy swinging by you can buy tickets here.

The following week on Saturday October 8th the film is screening at Filmzeit Kaufbeuren in the Filmblock V programme, which kicks off at 8pm at the Stadttheater Kaufbeuren. You can download the full programme here for more info. 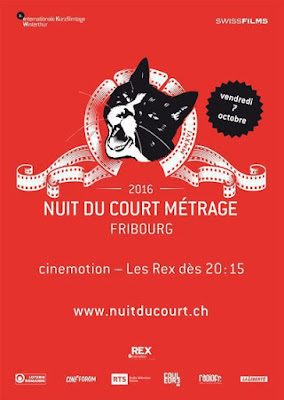 In between both of these there will be another stop on the Nuit du Court Métrage tour for any Swiss short film enthusiasts among you. The touring programme's first October stop will be in Fribourg on Friday 7th at the Cinemotion-Les Rex, kicking off at 8:15pm. All told it's going to be a busy month ahead for Klementhro and happily I can confirm that he'll still be doing the rounds through til January 2017 at least. There's life in the old seadog yet, evidently. Watch this space for updates!
Posted by Struwwelpeter at 04:35