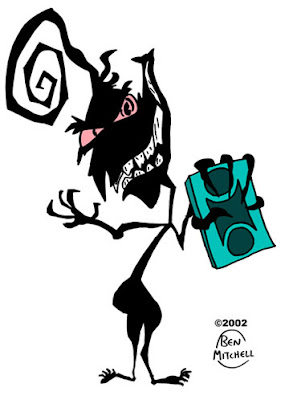 A couple months ago I wrote about the possibility of developing a character from my old webcomic ‘Mitchells In England’ for a graphic novel (or possibly several). This has been incrementally taking shape, but only as far as the writing is concerned. I think it’ll be a funny and interesting story when it comes together, but I’ve been going back and forth as to what kind of visual style I should use.
While my usual ‘Mitchells In England’/’House Guest’ look seems logical, it may be better to approach the artwork in a more contemporary way. I’ll cross that bridge when I come to it, I guess.
In the meantime I’m still eager to produce a graphic novel of some sort, and a friend of mine came up with a pretty nifty idea: adapt ‘House Guest’ into one! In theory it’d be pretty easy - as all the artwork produced for the film could be used, converting it to a comic-book format would just be a matter of laying out the stills and text. I could probably even include segments that were eventually edited out of the film, so it wouldn’t just be a picture-book of material people are already familiar with.
It’s early days (well, early first day) but I think that with some thought it might come together really well. I actually got so enthused last night that I even whipped up a concept for the book cover: 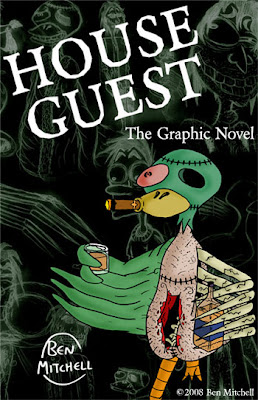 How do you like them apples, Spiegelman?
Posted by Struwwelpeter at 10:24 No comments: