Backgrounds Part 3 - Not For The Agoraphobics

I have decided to get out of that cabin for some fresh air. Now these backgrounds are a lot more fun to do as they have no reliance on geometry or necessary continuity, so they can be drawn pretty much on-the-fly. A friend of mine, upon seeing these, asked me why there were so many xmas trees in these woods. The sad, simple answer is these are the easiest trees to draw. Truth be told, a lot of cartoonist license has been used when it comes to the flora of the film's setting. 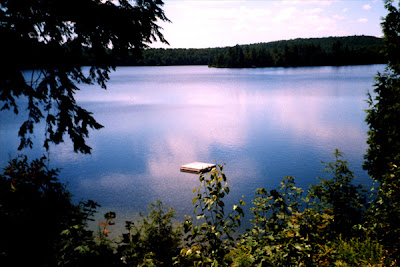 Really the backgrounds here are inspired by the coniferous cranny of the Laurentians that my family hails from, so it isn't a typical British countryside by any stretch. Though if we're nitpicking, ducks don't come back from the dead when struck by lightning either. Anyhizzoo, let's fawn over the purty pictures...

Well that's enough of that. Now get back inside.
Posted by Struwwelpeter at 20:26 2 comments:

Following up on the last entry, here are a number of finished backgrounds that will appear in the film. These are of the cabin's living room and foyer interiors, which calls for a lots and lots of shaky wooden slats.

For somebody who has been doodling since infancy, I can't draw a straight line for shit. But you can more or less tell what you're looking at and the cruddiness of the lines have a sort of hapless charm. Sort of. While an indulgent part of me misses the nifty look of the wooden textures from when this cabin was originally built, this look is far more visually appropriate so I'll have to put my hat in my hand on that one. The keen of eye might notice that the Hunter has an 'Agnosticaust' poster and a 'Johnny Star' poster in his house. A man of undeniable musical taste.
Posted by Struwwelpeter at 11:47 No comments:

In a couple of earlier entries I described the process of constructing sets in a 3D CG environment. This was back when I was still contemplating 3D computer animation as a viable option, before reconciling myself with the fact that the shaky, crude visuals of the hand-drawn concept art suited the film far more. Now that I'm soldiering on with the 2D animation process I've come to the point where I can no longer run from the stage of production I've been putting off: backgrounds.
After analysing the storyboard I've determined that there are roughly eighty (that's not a typo, the 'y' is indeed supposed to be there at the end) background drawings required for the film in its entirety. It brings fucking tears to my eyes. My chief concern is that, while with a fair deal of practice I can create character designs and poses which are consistent with one another, I positively suck at backgrounds if any spacial geometry is involved. Have another look at this kitchen from the concept art:

The colour palette, the wobbly lines and the irreconcilable proportions make it akin to the demented scrawling of an infant drawing with the pen between its teeth. Interestingly, our course leader has consistently argued that such a lack of ability is, in its naïveté, endearing, and fitting with the aesthetic of the characters. Frankly I'm not having any of it. I mean, there's 'charmingly naïve' and then there's just 'patently rubbish'. The other extreme would be the equally unsuitable, shiny-looking 3D background.

This time it's naïve but in an entirely charmless way, though it at least makes sense in terms of proportion. So, what to do? The solution I've decided to go with is pretty obvious - to meet in the middle; Retain the crappy, shaky lines from the concept art as well as the geometric perspectives of the CGI set, discarding the polished textures of the latter and the haphazard, nonsensical alignment of the former. To do this I still get to put my CGI set to good use (so hey, it wasn't a waste of time after all!). Rendering the same image of the CG environment as line art, I print out the result and use the lines as a guide to keep my proportions in check.
That's right, I'm tracing, bitches! And all the while that notorious scene from 'Chasing Amy' is playing in my head. Admittedly it's a bit of a cheeky shortcut, but have a look at the result:

It pretty much does exactly what I was hoping for from the start. It's not too cluttered, the colour scheme is more subdued and it doesn't dominate the frame when there are characters in the foreground. Really, it's there to not necessarily be looked at, but just to let the viewer know where the action is taking place. The best part about using this method is I can then keep using my set and just render out stills from different angles so that the accompanying backgrounds maintain continuity. Here are a few examples:

Technically this background actually messes the continuity up some as the blender has disappeared. Let's just say it's been put away somewhere...

The last background has obviously moved the action on to the adjoining dining room, where the interiors are noticeably different. The next entry will feature more of a look at the cabin's ever-so-manly, rustic interior.
Posted by Struwwelpeter at 19:23 No comments:

A Laudable Lack of Organisation

My devout professionalism when it comes to the film-making process is...well, non-existent. So I doubt it will come as much of a surprise to anybody to learn that, rather than going through the required layouts logically and methodically, with a sense of order for ease of reference, I've been spewing them out at random. When I've exhausted every conceivable layout and pose from the storyboard I'll be faced with the unenviable task of sorting them all chronologically by scene, then by shot. In creating all this extra work for myself I've come to the conclusion that I am, in fact, a closet masochist. I should just cop to it and start paying some sallow dominatrix to beat me senseless every weekend.
Until I can get together the scrilla to indulge that vice, here are some more examples to show how scattered the whole thing has become:

Two more drawings of the Hunter having gone crazy (a bunch more from this scene were posted here). The latter shot accomodates a double-barreled shotgun being raised into the frame.

These drawings have very little facial detail as they will be silhouetted in the colouring process save for the eyes. To keep the character from going too off-model and unrecognisable without features you can see some consideration has gone into the shape of the head.

Our good friend the Prospective Lay. The pose of her in a seated position was drawn in a manner that allows the character to be placed against two different-angled backgrounds and give the impression that she's shifted her position. Whenever I can cut corners I can, I'm just that crafty.

Hands - they're a bitch to draw on their own, and when they're attached to arms it's even trickier. Lots of erasing, redrawing and staring at my own hand in that position went into these.
That feathery prick of a zombie duck is notable by his absence this time around. Rest assured he'll reappear soon enough...
Posted by Struwwelpeter at 09:03 No comments: