"The Naughty List" is finished! As it's the end of June, pretty much the equidistant point between holiday seasons, naturally it's the perfect time to unveil a xmas-themed short...what an ass I am.
Although if the reception to my first film was anything to go by, I suppose if I start sending it out now it could take a fair few months for it to pick up steam. Also, while it definitely screams 'xmas' on the surface, at its core it's a film about the frustrations of dealing with upper management, which people can relate to all the year round. To that end, here's an excerpt from my funding pitch back in March:

Eh? Eh? What a blagging little shitbag I am. I guess they didn't buy it 'cause no cizzash was ponied up, so I'm doubly proud that I persevered with it and was able to follow through. Plus the trade-off with the smaller amount of private funding I was able to secure for it was that I could stick to my original idea and not have it diluted or tinkered with. I'm still at a point in life where I'm kind of precious about that stuff. Give me another year in this industry and I'll no doubt have abandoned such trivial concerns as integrity and self-worth. Until then, here are some stills to prove I'm not making the whole thing up: 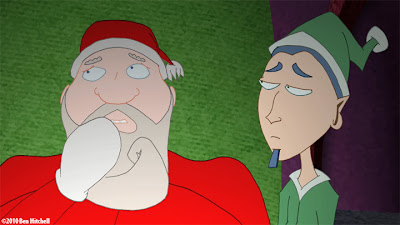 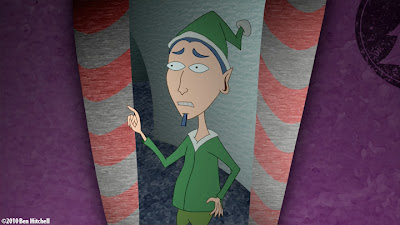 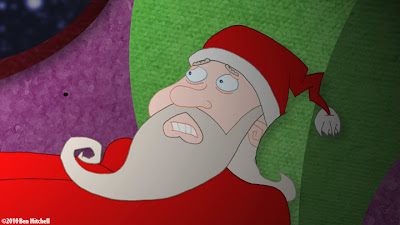 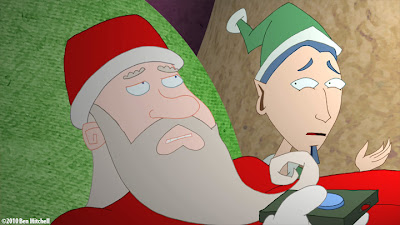 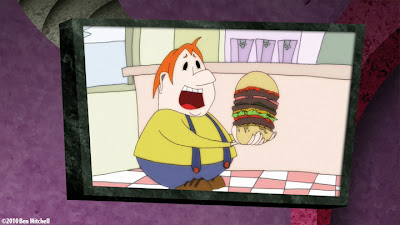 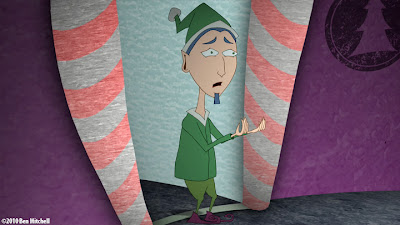 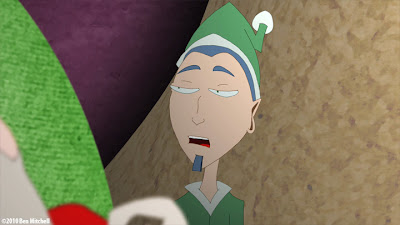 And to all a good night.
Posted by Struwwelpeter at 11:27 No comments:

Backgrounds!
I'm no Bill Wray (who, of all the living background artists, fucking rules) by any stretch but, with the small number of backgrounds this film requires compared to my first two, I've been having a bit more fun with the details and texturing. Use your eyes for looking at them! 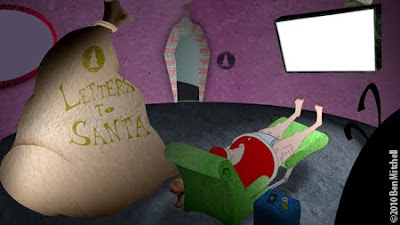 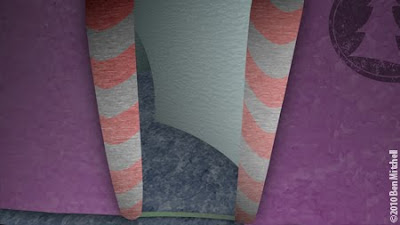 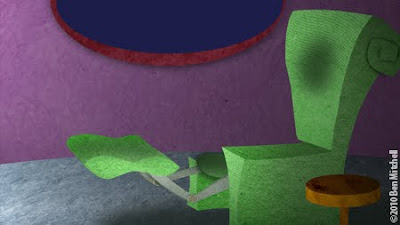 I wanted these to be quite loose and playful (adorable li'l scamp that I am). Beginning with sketches, I overlaid colours and textures for each background element, using Photoshop's warp and lighting tools to create a contoured effect when necessary.

Against these backgrounds the character animation comes off as a little too stark. I've decided to soften the look by colouring in the black outlines and applying lighting and gradients to the flat colours. This really goes a long way toward selling that the characters are inhabitants of the environment I've created. 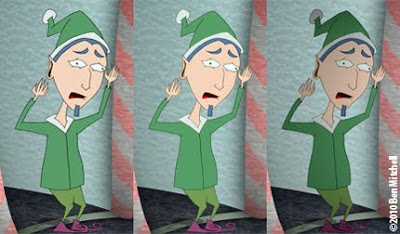 As my version of After Effects doesn't quite nail the lighting effect I'm after this means I've been having to go through every frame of character animation and make the changes manually. It adds a lot to the post-production but the schedule I outlined at the beginning of May left some leeway and I'm still confident that I'll get the film finished before July. I think it's worth the extra effort.
Posted by Struwwelpeter at 01:13 No comments:

Quick festival update, roughly around the same time 'House Guest' (a film I made that I may have possibly mentioned on this blog before) will be screening in Brazil, it'll also be showing at the Italian festival Salento Finibus Terrae. To be more precise, it'll screen in the Animation section on July 18th at 9pm. The festival takes place in the delightful (I assume, I mean it's Italy so the odds are in its favour) town of San Vito dei Normanni, Apulia. More info including the full festival line-up will be up on their website soon.
Posted by Struwwelpeter at 07:35 No comments:

Continuing my quest to represent just what awful creatures children can be in cartoon form, I've knocked out a bunch of tiny vignettes. Here are some of my favourites: 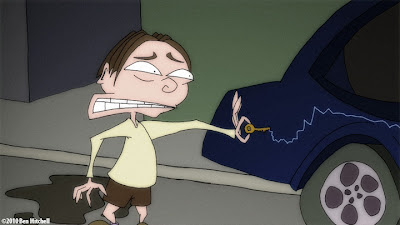 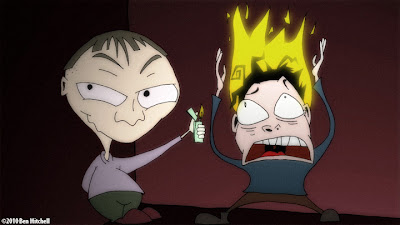 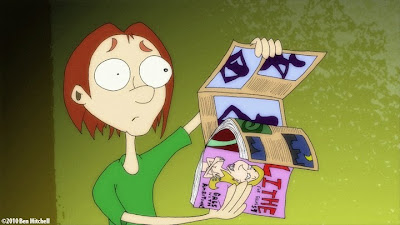 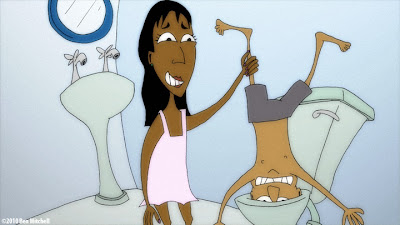 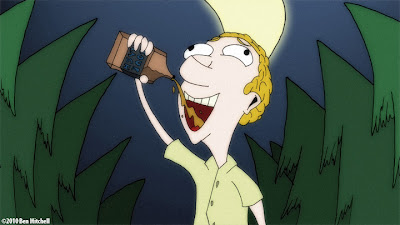 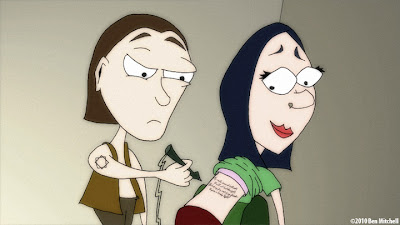 The last one is a cameo of sorts (in a 'Muppet Babies' sense), my sister actually had an Edna St. Vincent Millay poem tattooed on her back. Could've been worse, it could've been Maya Angelou.
Generally with these shots I was going more for 'silly' than 'dark'. I reckon these are ultimately innocuous enough to keep it a family-friendly film.
'Family friendly'...what's become of me?
Posted by Struwwelpeter at 05:05 No comments: 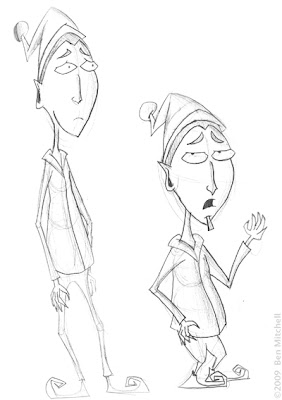 As my new film 'The Naughty List' is nearing completion I figured that this month's preview of images from the forthcoming collection 'Brain Spillage' should relate to it. These were the original character designs and concepts that I came up with ages ago. 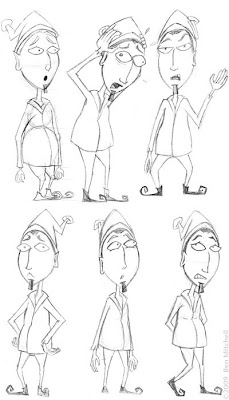 Aside from a specially-produced xmas card I circulated in December, nothing really came from these until March when I knocked out a storyboard, then it was dead again until a month ago, and now it's almost finished. Weird how the mood just takes you to bring something to the top of the priority pile. 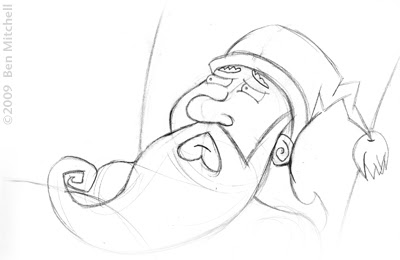 With that in mind, it's gonna be a bit of a mad rush to get 'Brain Spillage' put together in time (I'm aiming for the end of this month), but it helps to have another project waiting in the wings to take one's mind off the inevitable post-completion anticlimax. 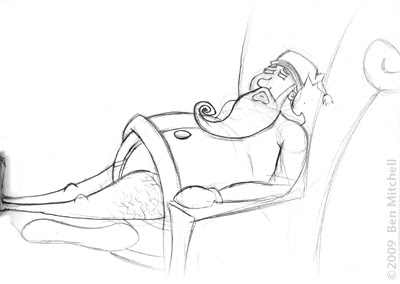 Posted by Struwwelpeter at 03:23 No comments: