So it only took me fifteen years to finally finish this... 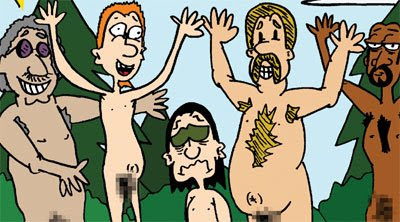 The full-colour reissue of the first 'Mitchells In England' anthology is done and can be purchased through that oh-so-fine website Lulu. I'm really stoked to see old comics I drew up to fifteen years ago all cleaned-up and coloured-in, and by filtering out the horribly unfunny ones (I started when I was ten, so you can imagine a lot of it doesn't date too well) it makes for a pretty decent retrospective. 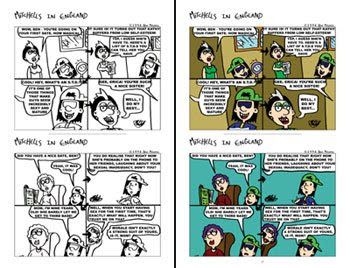 In the really old strips, adding colour goes a long way to making the comic more legible.
I've modified this second edition somewhat - aside from colouring it all in, while the cover is the same save for some additional shading, the back design has been tidied up a little since the original 2006 release. Also, the option to create a full-wrap design with Lulu means the spine is less generic, with a more fitting typeface. 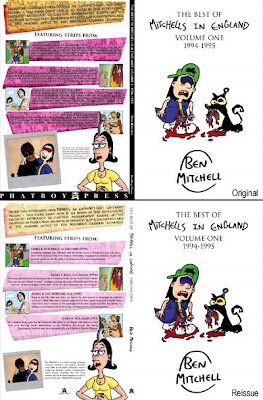 The 2006 edition front/back design, compared to the slightly-modified 2009 reissue.
Inside I've now included new introductions to each chapter, as well as an afterword describing the 'restoration' process. 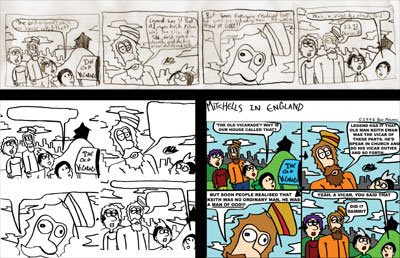 An example of a 1994 (drawn at age 10) strip in its original form, and the end result after the cleanup and colouring stages.
So if you feel the urge, go to the checkout page and buy yourself and everyone you know several copies each! As with 'House Guest', the book is available in paperback and as an eco-friendly digital download. Plus you can read sample pages online to gauge whether or not it's up your alley.
Buy 'The Best of "Mitchells In England" Volume 1: 1994-1995'
Posted by Struwwelpeter at 16:43 No comments: 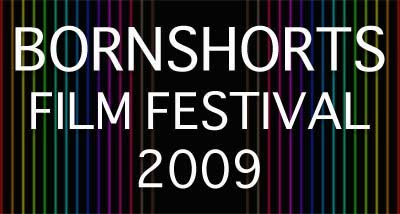 'House Guest' screens at the BornShorts Film Festival on Bornholm Island (Denmark) this August. Cheers guys!
Dates/Times to follow, in the meantime have a look at their site or check them out on Facebook/Twitter.
Posted by Struwwelpeter at 06:20 No comments: 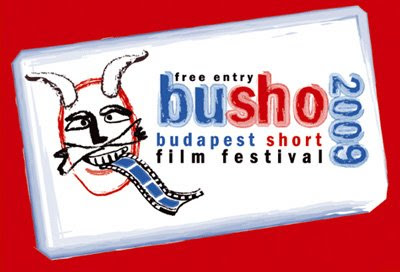 The Republic of Hungary is the next stop for 'House Guest', which has been included as part of Busho 2009, the Budapest Short Film Festival. Dates and times haven't been listed yet, but will put them up when I know. Official website here.
On a less encouraging note, the last month and a half has been strangely decadent - between the awards, the Faith No More show and some unexpected perks in my personal life, June 2009 will probably go on record as one of the best months of my life. The unfortunate side-effect of this is that my weight has gone unacknowledged until now, and I'm back at 96kg after reaching my target of 95kg last month. Not a huge setback, but I need to start thinking more conscientiously so I can throw it into reverse again. See, I'm not wired like most fat guys, I don't eat when I'm down because I can't be bothered. When things are going really well, though, bring on the dim sum, JD and porterhouse steaks.
So, ironically, it's harder to lose weight when I'm in good spirits. It makes a kind of sense - when I was monstrously huge I was always pretty content, and I started successfully losing weight only when I got anxious about my health. Then when I was settled in Bristol and happy again, the loss more or less plateaued.
Psychologically speaking, I could surround myself with negative stimuli and make myself all depressed to start losing weight quicker (y'know, get all paranoid about swine flu, the economy, tick-infested chipmunks that are coming to kill us all, that kind of stuff) but then I'd be a misery-guts and just bug all my friends. So unfortunately the only other option is boring, sensible eating and boring, sensible exercise. But I guess I'd rather be bored than morose. 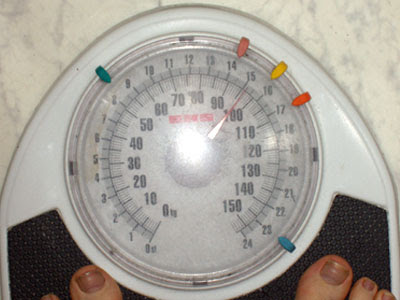 Here we go again.
Posted by Struwwelpeter at 07:11 No comments:

Hot on the heels of "Ground Running"'s tour inclusion, "House Guest" has been selected for another festival in the magical land of Karlovy Vary, Czech Republic.
The Fresh Film Festival will run from 12th-16th August, so pencil in a Czechoslovakian (wait - it split up? When?!) detour in your summer schedule so you can catch the screening. Seriously, do it already.
More info at the official site, and there's a MySpace page too! Remember MySpace?

Posted by Struwwelpeter at 17:21 No comments: 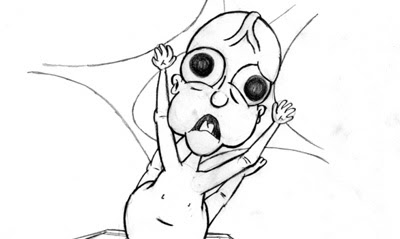 Hopefully it will attract a gaggle of German groupies.
Posted by Struwwelpeter at 14:07 No comments: