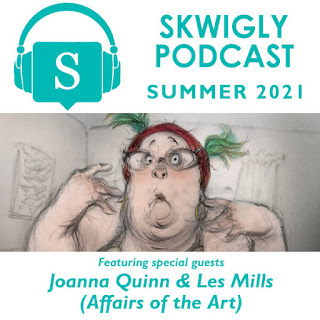 Hi there folks, it's been a minute. In fact I don't think I've ever gone over a month without finding some excuse to talk about myself on here. So, y'know, time to overcompensate.
Over in Skwiglyville we have ourselves a new, (mostly) Annecy-focused episode of the Skwigly Animation Podcast featuring animation royalty Joanna Quinn. Joanna's been one of our biggest supporters in every respect since the earliest days of Skwigly and we've been eagerly waiting for an excuse to bring her on the podcast (although she has appeared previously on a podcast minisode from back in the days of BAF) since before it even started, so what better than to discuss hers and Les Mills's long-gestating new Beryl film Affairs of the Art? On top of receiving the Special Jury Distinction for Direction at Annecy the film, co-produced by the NFB, has won awards at Clermont Ferrand, Animafest Zagreb and Kaboom among others and is easily one of the most technically stunning films doing the rounds this year. Download link here or stream it below:
Also discussed in this episode are Annecy shorts highlights, Mikey Please and Dan Ojari's upcoming Aardman/Netflix special Robin Robin, Erick Oh‘s immersive short Namoo, Marq Evans’s Will Vinton documentary ClayDream, Alberto Vázquez‘s Unicorn Wars, Jorge Gutierrez’s Maya and the Three, Netflix’s adult animation slate including the stop-motion anthology series The House and the announcement of Robert Morgan's feature film debut Stopmotion. 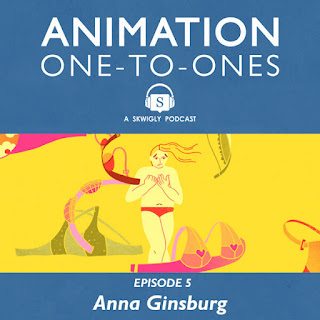 Our new interview series Animation One-To-Ones is coming along nicely with our latest episode welcoming back the uniquely wonderful Anna Ginsburg, who previously appeared on Intimate Animation to discuss her film Private Parts. Since then she has done some brilliant work including What Is Beauty? for CNN, A Love Hate Relationship for Breast Cancer Now (which recently screened as part of Annecy's Commissioned Films programme) and Typically for Bloody Good Period alongside fellow Intimate Animation alum Caitlin McCarthy. You can download the podcast here or watch below:
We have a whole bunch more of these planned for the foreseeable, so to be sure that you don't miss any you might want to go ahead and subscribe to our YouTube channel. 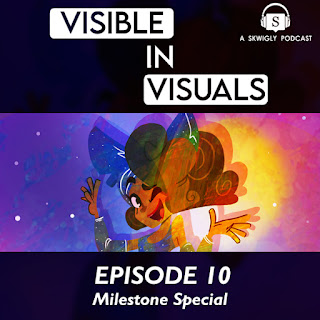 We also have the tenth and, for the time being, final episode of Visible in Visuals up on the site, in which organisers Tanya Scott and Hodan Abdi discuss what progress has been made and what still needs to be done with a panel of contributors - Bimpe Alliu, Mohamed Orekan and Paula Poveda-Urrutia - who were instrumental in getting the series off the ground. Download forevs or stream to your heart's content:
It's been a real privilege to have been able to give this series a podcast platform through Skwigly and if you've not yet listened I strongly urge you do so. Fingers crossed that it will continue in some form once they've had a regroup as there are many more discussions that I'm sure need to be had. 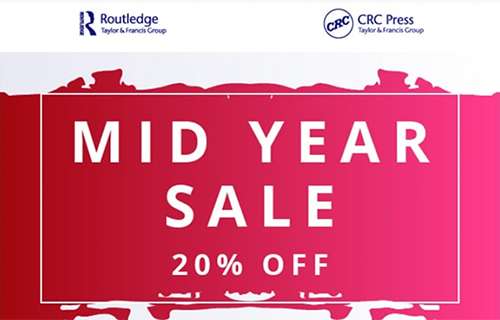 If you're in more of a readin' mood than a listenin' mood then prepare to be effervescent with excitement that my book Independent Animation: Developing, Producing and Distributing Your Animated Films is available at 20% off until August 1st as part of the Routledge/CRC mid-year sale. Another CRC book worth checking out is Andrijana Ružić's Michael Dudok de Wit: A Life in Animation, a thoroughly-researched overview of the director's filmography and working process that I enjoyed a great deal (you can read my full review here). There are also a couple of recent interviews you might want to check out, including my catch-ups with Claude Cloutier (Bad Seeds) and Michelle Kranot (The Hangman at Home/We Are at Home), who have both made stunning new work worth keeping your eyes open for.

Since my last post I actually clocked that the end of April marked ten years of my involvement with Skwigly, beginning with my first book review of Bill Plympton's autobiography, followed shortly after by an interview with the man himself. I hadn't planned on doing more for the site (much less one day taking it over) and, given how crucial discovering his work had been to my switch of career direction from graphics to animation and films, meeting Bill felt at the time like everything coming full circle. But, as is often the case in life, it turned out to be the beginning of something far grander. The current team would eventually take it over a couple years later and I'm hugely proud of what we've grown it into and the wealth of relationships that have branched out from it. I posted up a bunch of memories that stood out over on my Instagram including crossing paths with other inspirational figures Joanna Quinn, Signe Baumane, Peter Lord, Billy West, Rosto, Richard Williams, Tomm Moore and some previously unseen footage of chats with Adam Elliot (another crucial artist who helped shape my career direction) and a then up-and-coming Rebecca Sugar, not to mention the ongoing relationships with organisations such as the NFB and Cardiff Animation Festival and some unexpected excuses to sit down with folks outside of the animation sphere like Kaada, Charlie Kaufman and Caroline Thompson.

The fact of the matter is that's just the tip of the iceberg and there are a ton of other wonderful memories I didn't have time to post up, such as organising an interview and fan Q&A with legendary Jan Švankmajer; speaking with inspirational talents Bob Jaques, Stephen DeStefano and Jim Gomez for a Ren & Stimpy special; literally hundreds of chats with artists whose work I love (see the big ol' list under Skwigly Interviews on the right there); getting to bring on my amazing friends who've been smashing it like Jo, Jane, Lauren, David, Phil, Mary and Matt; driving folks nuts with Steve's MAF quizzes; interviews conducted in lightning storms; bringing my dad on the podcast to chat about his work on Yellow Submarine; curating programmes for Encounters, BAF, MAF, CAN and CineMe; working with other festivals including Animafest Zagreb, ITFS Stuttgart, DAFF and Anima; appearing on TV to talk about dirty cartoons with Steve; teaching the world to sing in Brussels; teaching the world to sing in Manchester; even being stranded in Geneva waiting for a bus to Annecy after my flight from Bristol was delayed by 4+ hours has, by virtue of the folks I met along the way, become a fond memory...just about.
It isn't all roses though and unfortunately doing this kind of work means you occasionally encounter the odd nutjob or angry little raging bellend. And sometimes someone you admire when you first meet/interview them turns out to be, well, not so admirable. While those stories do make for better anecdotes, I'll save them for me memoirs. What is clear is that those instances are completely eclipsed by the comparative wealth of joyful moments and that's an important thing to hold onto.

More important than anything else is that it was through running Skwigly that I met my favourite lady person Laura-Beth when she came on board as a contributor and eventually our main Features Writer. I'd never have suspected that indulging what started as a hobby for niche animation journalism would have brought somebody so wonderful into my life and she continues to surprise, impress and inspire me every day.
Fun fact: our marriage was such a legendary event within the animation world that acclaimed director Wes Anderson included a replica of our wedding venue in his stop-motion adaptation of Fantastic Mr. Fox...nine years previously.
Now go follow her Insta if you haven't yet because it's much more interesting than mine.
Posted by Struwwelpeter at 10:03 No comments: