Our Skwigly advent calendar has wrapped up for another year, and what a thing of beauty it has become!
Here's another sampling of brilliant contributions:

Massive gratitude again to everyone who took the time! Until next year, boys and gals.
Posted by Struwwelpeter at 07:47 No comments:

Happy allocated-family-togetherness week, m'lovelies! Here's hoping you have a tolerable time with you and yours this season. In lieu of a scrapped plan to put up some free downloadable EPs I've cleaned up my live recording of Danny Elfman's "La Canzone di Sally"/"Sally's Song" (from Nightmare Before Christmas) from the other week and made it downloadable between now and the new year as a sort unofficial Christmas single. Obviously I didn't write it so can't sell it, but should you feel so inclined give it a download here!
Posted by Struwwelpeter at 06:20 No comments:

I mentioned last week that we would put up an extended version of Julia Young's brilliant interview with Disney legend Glen Keane. Here it be!
This is the first episode of what I've lazily dubbed Lightbox Plus (because, y'know, it's Lightbox with extra bits), a series I expect will be less regular than the standard Lightbox episodes and exclusive to our Vimeo channel. Don't forget we have another interview with Glen about his pre-Duet Disney years in the latest podcast (which you can download here).
Meanwhile the latest regular Lightbox features Seb Burnett, Creative Director of Rumpus Animation, talking about the previously mentioned Bertram Fiddle game. There are still some e-shopping days left and I suspect it would make the perfect cheap-as-chips gift for the indie point-and-click retro-gaming/Victorian era enthusiast in your life. So long as they have an iOS device. Have a watch below:
Learn more about the game at the Bertram Fiddle website. Look at me, brimming with seasonal altruism (in the self-serving-because-I'm-in-it sense).
Posted by Struwwelpeter at 06:12 No comments:

Merry Christmas to Me

Thought I'd treat myself to a little early Christmas present: 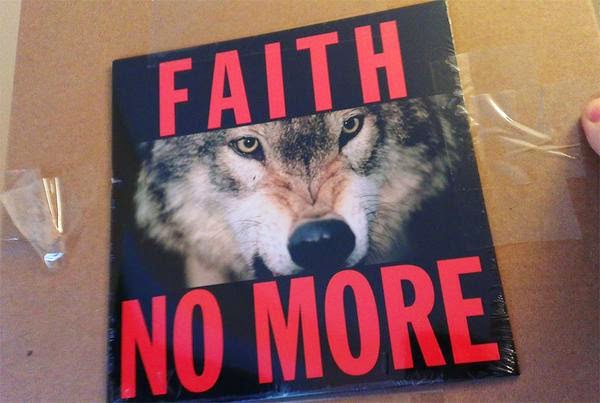 The physical copies of this one are very limited Record Store Day 'Black Friday' exclusives that didn't make it to UK stores. Luckily I managed to snag one kindly listed on the 'Bay without being horribly extorted. It's probably not a surprise that I'd be an avid Faith No More collector. In truth I don't think I've ever brought up the extent of it on here because it's sorta kinda sorta maybe a bit of a mental illness. To give a bit of a Jack-Torrence's-wife-reading-his-manuscript-for-the-first-time peek, this is an outdated photograph of how many copies of this album I own (but look carefully, they all have slight differences! Slight! Differences!): 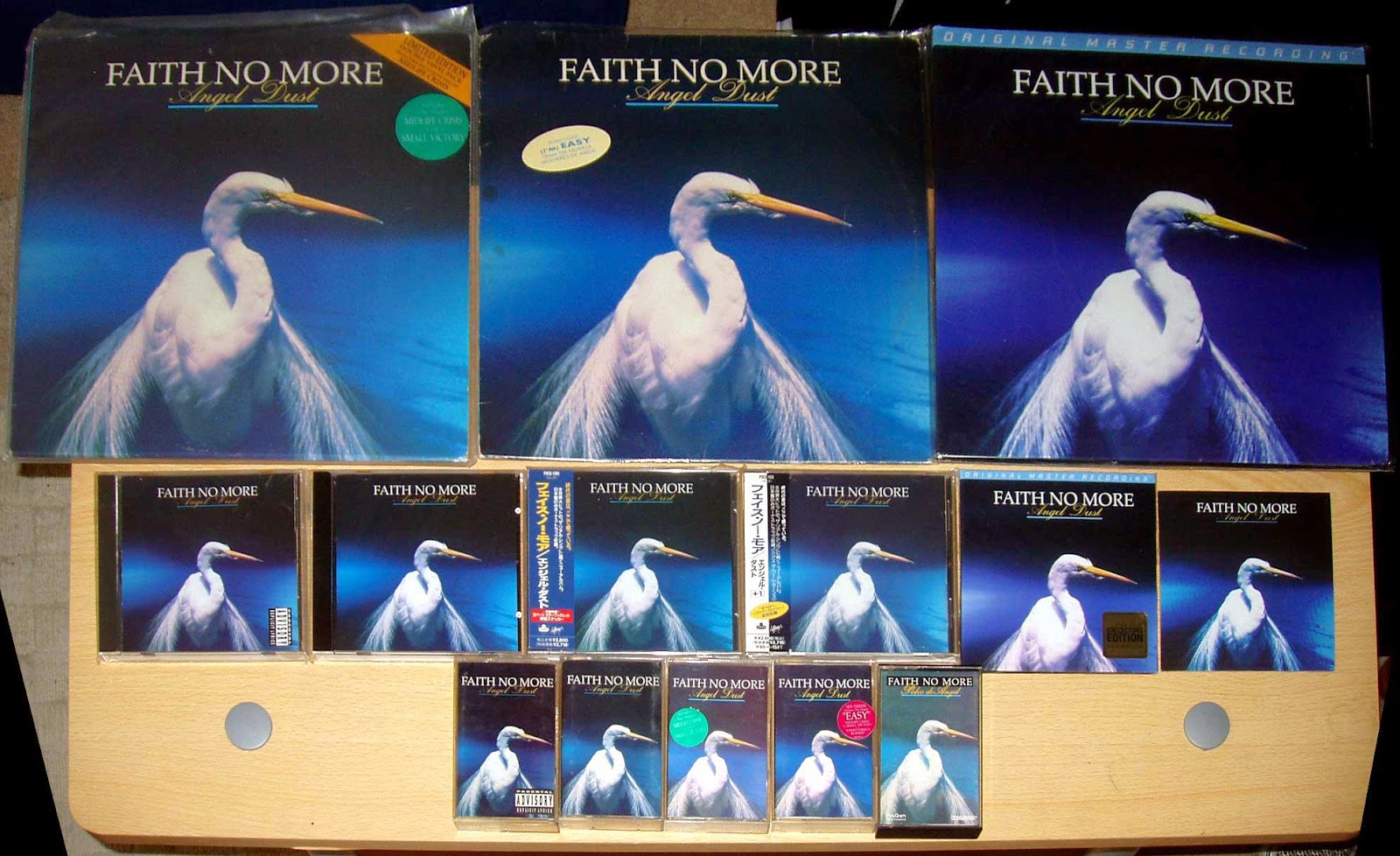 So what was I gonna do, not find a way of getting my hands on the first vinyl 7" single they've released since 1992 (I am, of course, not counting promo releases and their 7x7" special extended edition of King For A Day, Fool For A Lifetime, because that would be daft)?
So go, be with your brothers. They've been waiting 22 years. 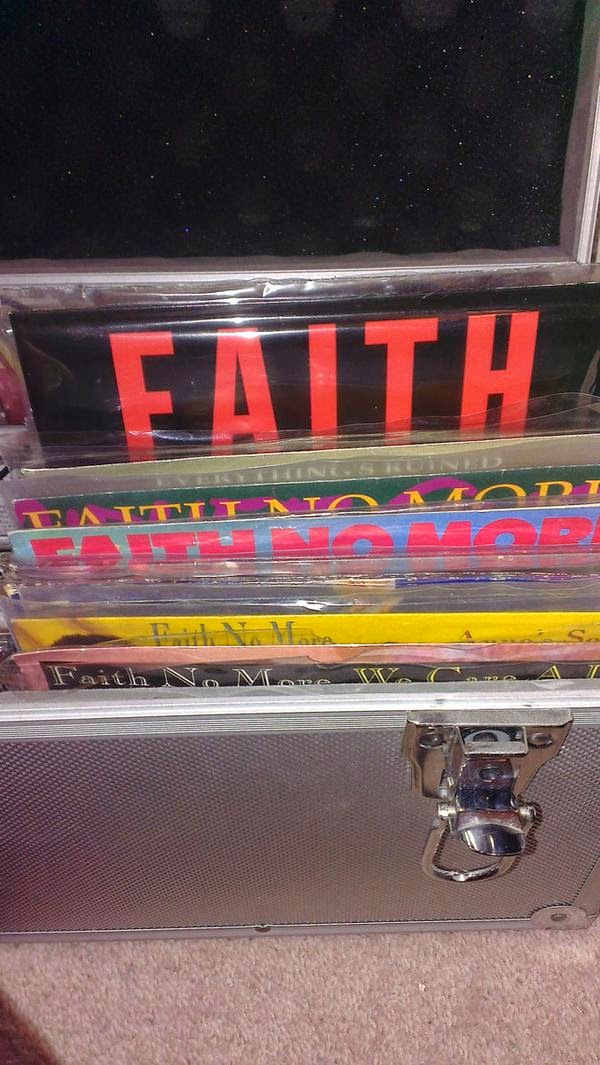 The remix is pretty damn good, too.
Posted by Struwwelpeter at 05:31 No comments: 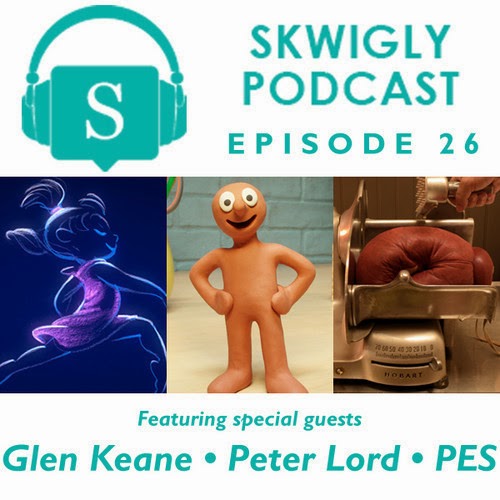 I am chomping at the goddamn bit to hear the studio version. Spontaneous Christmas EP, chaps?
What? You never know, they might be reading this.
Posted by Struwwelpeter at 23:25 No comments:

What do all these people have in common? Apart from being generally amazing, I now owe them all a pint or several. 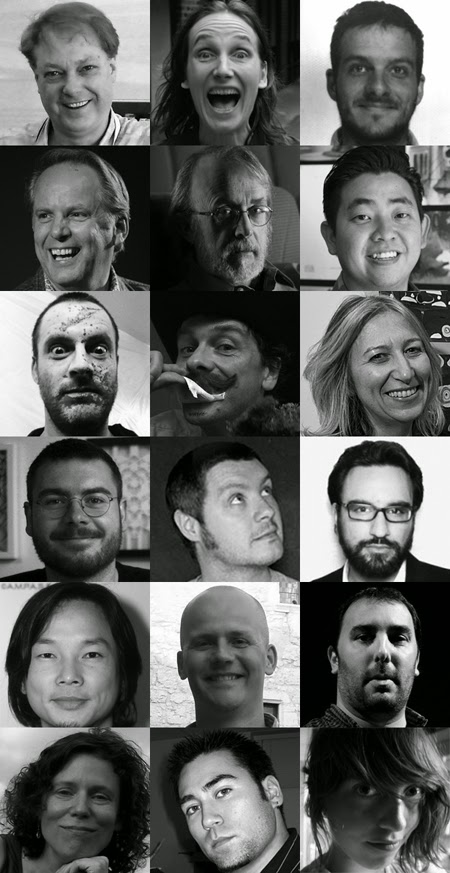 Quarter of the way there. Watch this space, friends.
Posted by Struwwelpeter at 14:23 No comments:

And then, terrifyingly, it was already December...

So...yeah...another month kind of slipped through my fingers there. Apologies.
But it's all for the greater good, as I'm sure you'll all come to realise...a year and a half from now. Christ, it just hit me: Before Project Group Hug is done, the world will have seen both a new Faith No More album and a new season of Twin Peaks.
(Apologies again, it appears a blog post can't go by without mentioning one or the other these days)
SO, what's been happening? Aside from the book I've had my toe back in the waters of production music - who knows, you may hear one of my compositional masterworks next time you're flicking through your Freeview or being forced to wait on hold by some ungodly customer service department - whilst also doing a bit of visual stuff for Bristol upstarts Rumpus Animation. Incidentally their first adventure game Betram Fiddle: A Dreadly Business comes out for iOS tomorrow, have a look at the trailer:

I might have had some involvement in that one as well. Just be wary of this lot:

Skwigly news - check out the latest Lightbox episodes, starting with Will Anderson and Ainslie Henderson, director of Monkey Love Experiments which recently won itself a Scottish BAFTA.

After this one I took a bit of a break from the series to rethink our approach; Frankly I don't feel it's 'landed' and there may be a better direction to go with it. We shall see, but either way it's back as of today with none other than legendary Disney character designer/animator Glen Keane. Have a watch of Julia Young's excellent interview, the extended version of which will go up next week to launch Lightbox+.

As with previous years we're running our daily advent calendar through to the 25th, with a new artist each day. Here's a smattering:


On the interview front I was absolutely delighted to get some more time with Aardman's Peter Lord (who I previously interviewed in 2012 for his film The Pirates! in an Adventure with Scientists) as well as Nick Park, the man behind Wallace and Gromit which makes him a bit of a goddamn rockstar.
The interview went up on Monday in anticipation of tonight's Bristol Encounters event Lip Synch: A 25 Year Celebration which looks back at some of the studio's early work, including their first Oscar winner in Nick Park's Creature Comforts. 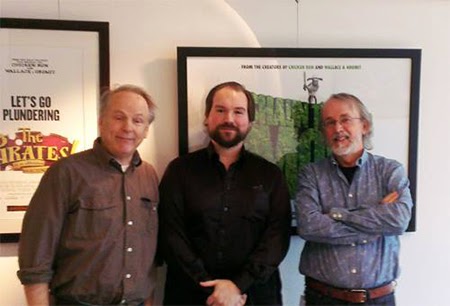 This era of their formative creativity represents my fondest memories of their work (well, on a par with The Wrong Trousers) so it was a real treat to get some time to natter about it. Incidentally I had also previously chatted with Richard 'Golly' Starzak, director of Ident, in episode 11 of the podcast which you can download here). Special thanks to Kieran from Encounters for helping set up the interview, if you fancy swinging by the event you can book tickets here.
On a musical note, I've been working on a special holiday sampler package as well as polishing a new album for Spring 2015. Supplementing this have been some 'practice' live shows where I've indulged my fondness for covers. Here's a stab at Mr. Bungle's 'Quote Unquote' (AKA 'Travolta'):
And keeping in the pale-Patton-imitation vein, last Saturday I closed my set with FNM throatripper 'Cuckoo For Caca'. If you make it all the way through it's followed by Danny Elfman's 'La Canzone di Sally' from Nightmare Before Christmas, for those who've ever harboured the desire to know what I sound like singing a Disney love song in Italian. Which I can only logically assume is everyone.
Posted by Struwwelpeter at 08:53 No comments: