'We Still Care A Lot' out now

Some not-so-Halloweeny but quite splendid news today in that the long-gestating tribute album to the late Chuck Mosley of Faith No More, Cement and VUA is out now.
Perhaps surprisingly my contribution (with some help by the wonderful Laura-Beth Cowley) isn't a Faith No More cover but one of my favourites from VUA, Nameless. I was overjoyed to get to meet him during his (sadly final) UK tour when he played just up the road at Bristol Bierkeller and see him do his version of the song live:

We Still Care A Lot features various artists paying tribute as well as a posthumous appearance by Chuck himself and I'm really proud to be a part of it. Head over to Murder Boy Music and grab yourself a copy.
Posted by Struwwelpeter at 12:32 No comments: 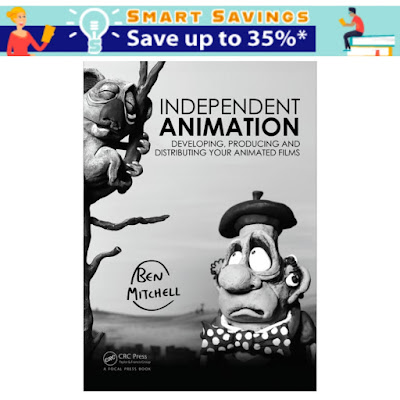 Happy International Animation Day!
Also coincidentally the day I squelched myself out of amniotic slumber 36 years ago.
What better way to mark both equally hallowed circumstances than by picking up a copy of my book Independent Animation? From today through to November 10th you can get it in paperback direct from the publisher at 20-25% off (30-35% off of you get it in eBook format) - with free shipping and all!
Packed full of production insight from the animation world's best, brightest and most inspirational figureheads, every moment you don't own it is surely a moment mis-spent! 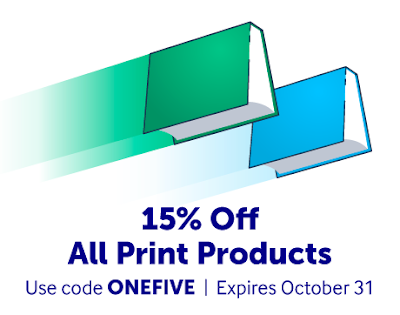 On the oddly-specific subject of possibly buying books I've made for less than you would usually, I've also been informed that Lulu are offering 15% off all print products if you use the code ONEFIVE at checkout until Thursday. So that includes my li'l indie comic House Guest: The Graphic Novel and the original, non-serialised version of Throat. 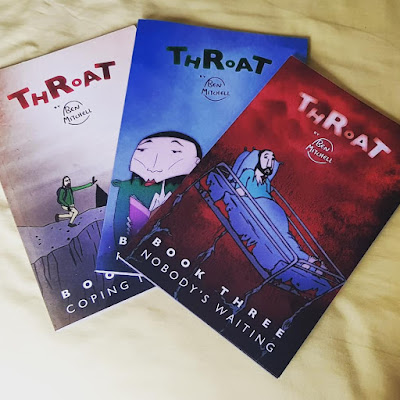 That reminds me - recently I'd noticed sales of the three-volume Throat series (same comic, just divided into three parts with some extras sprinkled in) had come to a complete halt; not an enormous dropoff to be brutally honest, but a dropoff all the same. After some investigating I discovered they've been completely out-of-print since the Spring (FFS). Would've been good to know. So after some liaising and fiddling I'm happy to report that volumes 1, 2 and 3 are now once again available in all good bookstores, by which I mean probably just Amazon.
Check out throatbook.com for more info if you reckon they'd be the preferable option what with those extra bits and all. Most importantly you should buy them for how satisfyingly the spines line up: 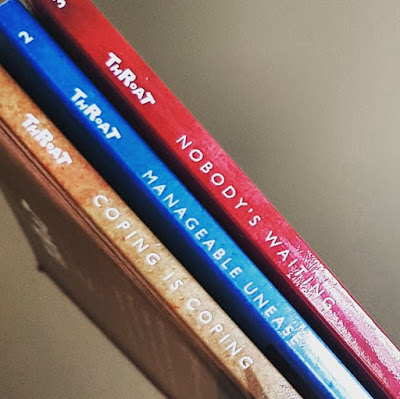 As the nights draw in... 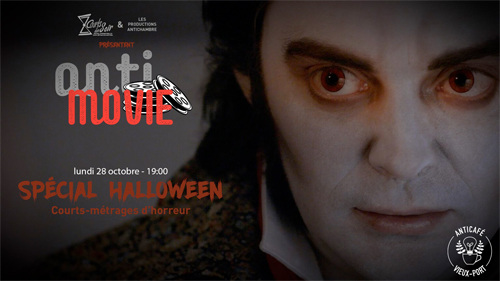 We've got ourselves one more October screening coming up for my cartooney li'l parable Sunscapades. The kids will be returning to Montreal for a special Halloween screening put together by the fabulous folks at Productions Antichambre and Festival Courts d'un Soir who included the film in their 2019 official selection back in April. Head to Anticafé Vieux-Port 6:30pm October 28th (coincidentally my day o' birth) for AntiMOVIE spécial horreur which looks to be a fun night indeed.

There are also a couple of festivals coming up in November you can catch the film at - on this side of the pond Sunscapades will be part of the line-up of the Norfolk Film Festival, which seems like a relatively modest affair but sees me in pretty good company judging by the trailer:
The festival will take place November 17th at the Norwich Puppet Theatre. Keep an eye on their Facebook page for updates as they come.

The following day Magma - Mostra di Cinema Breve will kick off its 18th edition that runs from November 18th through to the 23rd. No specifics as of yet but let's just say there's a good chance a certain troublemaking trio may make an appearance.
This is a different event to the Magma Short Film Festival that screened The Naughty List back in 2011 but I'm sure it's just as magmatic. Why, probably more so! 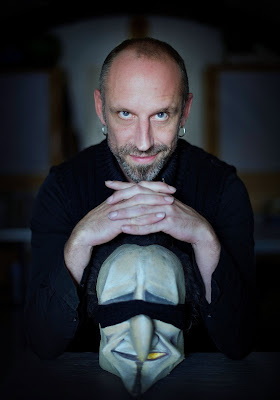 To shift away from my own self-love for a minute, I want to bring up something quite dear to my heart that I hope you folks can spare a sec for.
I've made no secret of my fondness and admiration for the work of the extremely talented and prolific Rosto, whose music and art I've written about at some length across various outlets in recent years. A friend of Skwigly and significant contributor to the my book Independent Animation, the man's enthusiasm and passion for his work was clearly demonstrated by the sheer volume of his output.
With musical origins dating back to the early nineties, Rosto’s interactive graphic novel project Mind My Gap ran from 1999-2014 and spawned a number of multi-award-winning animated shorts along the way, including (the rise and fall of the legendary) Anglobilly Feverson, The Monster of Nix, No Place Like Home, Lonely Bones (the concluding chapter of Mind My Gap) followed by the continuing adventures of the metaphysical band Thee Wreckers with Splintertime and his final film Reruns. 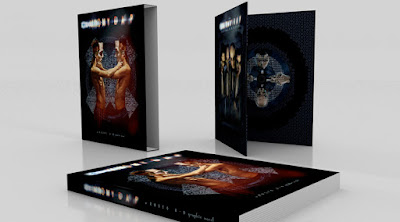 Not too long before his all-too-premature passing I was enormously honoured to be approached by Rosto to consult on and proof-read what would be a significant career milestone, the physical graphic novel adaptation of Mind My Gap.
When we last spoke he told me he'd finished a mock-up but I didn't know what the ultimate fate of the book would be until recently learning that Autour de Minuit are aiming for a physical release book/music combo as he had originally envisioned.
Through an incentive-driven crowdfunding campaign that officially launched a few days ago, fans of Rosto’s work can pre-order the set as well as a variety of other milestones of the artist’s legacy, such as the full Thee Wreckers Tetralogy on DVD/BluRay, earlier works including the original Mind My Gap shorts trilogy and The Monster of Nix, a limited edition 180g vinyl LP (I leapt on this) and an assortment of prints, collectibles and rarities. 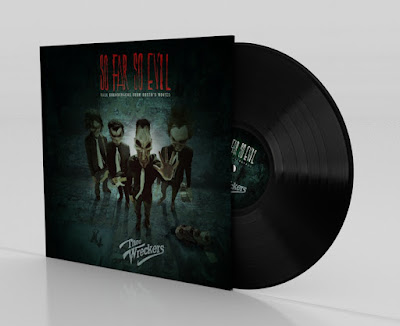 If you've not yet seen the man's work at the very least let this serve as an introduction to it - it's an incredibly gratifying and inspiring rabbit hole to go down. And if you have some cash on hand for some fun animation goodies, well, there's a whole heap of them to be found here.
Posted by Struwwelpeter at 10:57 No comments: 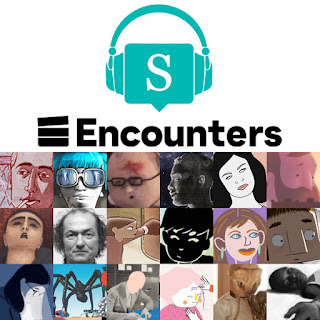 My series of Encounters 2019 podcast minisodes over on Skwigly have wrapped up, so if you've not yet treated yourself to some animation inspiration since the last post then tuck right in:
In episode 2 (download) we hear from attending filmmakers whose films participated in the International Competition programme Animation 2: Desire:
In episode 3 (download) we hear from filmmakers participating in Animation 3: HerStory:
Episode 4 (download) are filmmakers in Animation 4: GetReal:
Episode 5 (download) is Animation 5: Ubiquitous Chip:
And finally in episode 6 (download) are the filmmakers from Animation 6: Fake News!:
A cracking bunch of films from a cracking bunch of folks. It was a real pleasure to get some time which all of them and I hope you all get a kick out of it too. Many thanks to Encounters programmer Kieran Argo for bringing me on board again to conduct the sessions and serve on preselection - also thanks to Ewan Dunford at the Watershed for recording the final session.
I've also put together a handy playlist of all six episodes over on our SoundCloud channel which you can also stream below should you so desire:
Posted by Struwwelpeter at 00:29 No comments: