Ya Gotta Love Them Grecians...

Well, it didn't get snapped up by Depict, but my naked-baby-adventure-romp 'Ground Running' has fared better elsewhere. God bless those Greeks, particularly the ones at the Thermaikos 2Min Film Festival.
Although it was only confirmed today, 'Ground Running' is among the films that will be screened at the event which starts this saturday (Nov 1st). For more info check out their website. 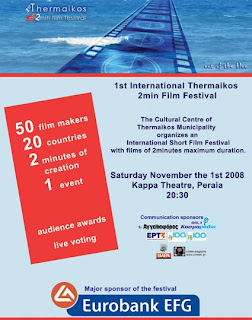 So, if you've always wanted to go to Greece but never had the right excuse, what better than to see a film of mine that runs at about 90 seconds?
Okay, there are many, many better reasons to go to Greece. Culture and architecture and blah-de-f*cking-blah...but, I mean, c'mon, look at how cute the little rascal is... 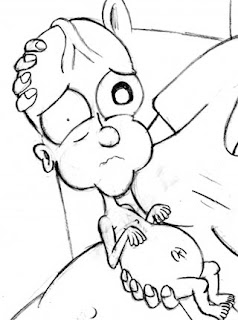 Posted by Struwwelpeter at 06:18 No comments:

So am I Huey Lewis or Ray Parker Jr.?


When ‘Ground Running’ was screened for the first time one of the evening’s fellow directors came over to our table to say some nice things, mentioning briefly that my film reminded him of a viral Xbox commercial he had seen. I told him I’d give it a look and, well, I did. Frankly, I’m a little freaked out as the commercial is staggeringly similar to the first few seconds of my film. 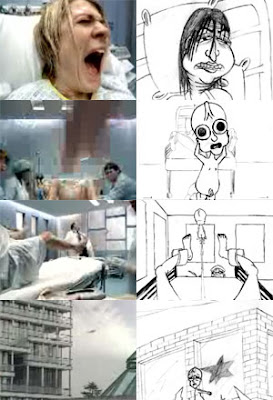 A woman in the agonising throes of childbirth shoots the baby out of her v’jay and it smashes through a hospital window. From there the similarities diminish, with the baby aging as it flies through the air and landing in a coffin (I guess somehow representing that…I dunno, ‘Life is short’, so waste it playing Xbox games?). As my film is primarily about being a postgraduate weighing up his options, the bulk of it is, in its own right, original. But watching this commercial is unsettling as it’s like looking at my idea done in live action and with a budget.
Here’s the kicker - they did it first. I am making absolutely no claim of being ripped off as this advert was made years ago (the youtube upload is from 2006) - but at the same time I am absolutely certain that I never saw this commercial. If I had, I probably would’ve sent it to everyone I know as, to be fair, it is pretty cool.
So, it’s a dark night of the creative soul for me. Is it really just a coincidence that my film’s opening is so similar?
I decided the only way to make peace with myself is to dissect the process. Looking back at a previous entry I remembered thinking about other funny birth scenes from film and TV. The ones that stick out in my head include the fantastic intro to Addams Family Values, the pacing of the birth scene being very cartooney in and of itself.

I think other inspiring elements came from Ren & Stimpy…
…As well as a lovely sequence from Big Fish where the baby is popped out and slides along the floor. Given that was a pretty high-profile flick, I’d imagine that said sequence could’ve also been a springboard for the Xbox ad. Elements such as the timing and the ‘bungee umbilical cord’ are unique to my film as far as I know, but as a visual it could easily have been done before.
The real pisser is the baby flying out the window. I can think of a number of sequences from cartoons and movies where things are hurtled out of windows comedically, Looney Tunes, Farrelly Bros. movies, again Ren & Stimpy most likely. Later on in the Addams Family film the baby gets hurled through a skylight...
With all this in mind I’m fairly confident that my idea was the product of my own independent bricolage process. Bricolage being, essentially, the deconstruction of pre-existing ideas and their subsequent reassembly to create something new. To be honest, all creativity could be seen as a type of bricolage, as nobody can really create something new without drawing upon the cultural and societal influences around them. I think it would take a particular brand of arrogance to dispute that.
I’m still not comfortable with it, though. I think it might be worth it to create new footage for ‘Ground Running’, maybe get the runtime up to at least two minutes and change the structure of the opening scene so that it doesn’t share the same similarities. Until then, I think I’ll put further festival submissions on hold.
Now I find myself asking that vital question every young man asks himself at one time or another - ‘how do I get that baby out of the vagina and into the street without accidentally plagiarising an Xbox viral?’
Why, it’s a question as old as time itself.
Posted by Struwwelpeter at 07:18 No comments: