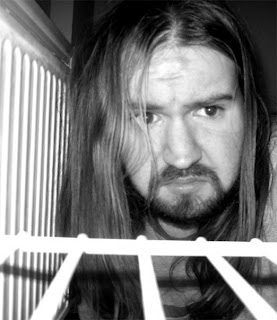 Another quickie weight loss update, happy to say am on track and am hovering at around 97kg.
The downside is I'm at a point where I don't give a crap. This always happens a couple months in. I get withdrawal. I yearn for junk I otherwise wouldn't even touch. I actually contemplated walking into the Ms. Millie's on the way home tonight.
Fortunately the rational side to my brain won out. Grapes and water it is. 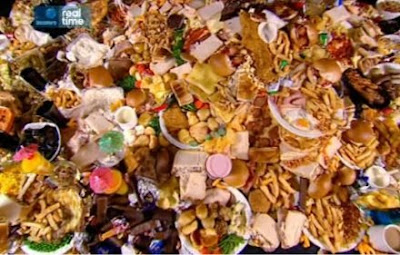 Right now this is like pornography to my pathetic, hungry brain.
I'm not having a good time. I don't want to be thin, frankly it creeps me out to be able to feel my bones underneath my skin. After I lost the first 70 or so lbs I got really worried because I could feel this hard bump on my neck. It was my fucking Adam's apple. By the time it developed initially I was already too fat to feel it so it didn't make an appearance until I was 23. That shit is chilling.
Why am I writing this? I need to go to bed. I'm all punchy. 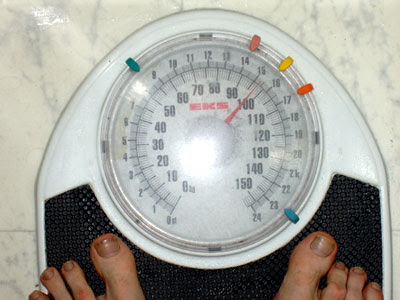 Posted by Struwwelpeter at 16:49 No comments:

The rough, unpolished 'line-test' aesthetic of my animated short 'Ground Running' kind of fitted in with the film's central theme and helped me finish it on time all at once. It had also made the film eligible for Portugal's 6th Annual Black & White Audiovisual Festival, and I'm pleased to say they accepted it! So mosey on over to the Universidade Católica Portuguesa from the 22nd-25th April and check out the festival in all its monochrome glory!

'Ground Running' will be being shown on Thursday April 23rd as part of the 'Video Competition II' segment at 9:45pm (WET). For more details - and to see what else is on - check out the festival programme here.
Just for the record, I'm keeping these festival posts brief from now on, as when I try to do long 'funny' ones I just come off as a smug douche. When really I'm a cuddly, lovable scamp.
Posted by Struwwelpeter at 14:09 No comments:

I just got off the phone with a doctor who told me that I need to 'lay off the exercise'. I never, ever would've predicted being told that kind of thing in my life.
It turns out my thighs have reacted badly to the sudden increase of Thighmaster usage, and something above the back of my knee has either popped, burst, clotted or strained. Whatever it was, I'm living with a slowly shrinking lump accompanied by a pretty nauseating bruise. There's absolutely no reason for me to take a picture of it and post it here, and yet I seem to have done exactly that. 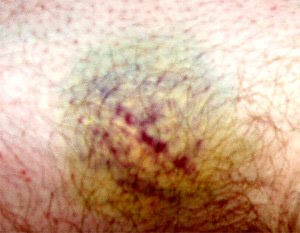 Hopefully you aren't eating. Well, if you were, you probably aren't now.
The upside to all this hazardous physical activity is that I'm still progressing well with the weight loss. Presently I'm at 98kg, and if I can lose about 1lb per week I should be at 97kg by the end of the month. 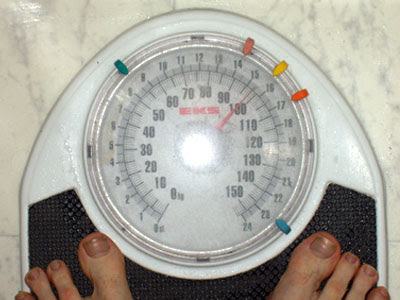 Slightly less of me to go around.
Posted by Struwwelpeter at 13:54 No comments:

Taking the Fun Out of Toys

It seems to me that too many have misinterpreted St. Paul's famous line:
"When I was a child, I spake as a child, I understood as a child, I thought as a child: but when I became a man, I put away childish things".
I'm not a scripture guy, but that's a quote that has some resonance with me. I'd assumed it referred to growing beyond the feelings of entitlement, angst and confusion we're plagued by during infancy and adolescence; A well-rounded adult should be able to acknowledge and eliminate (or, failing that, tone down at least) the distinctly childish aspects of who they once were, which by and large are negative - selfishness, arrogance, occasionally pissing oneself and so on.
What I'm seeing more and more of as I get older are adults who retain these charmless qualities whilst completely abandoning the joie-de-vivre, playfulness and curiosity that represent the positive side of childhood. They're putting away the good childish things and holding on to the wrong ones. The end result? Douchebags.
A lot of people also seem to take the phrase a little too literally, which brings me to the point of this post. Oftentimes folks actually 'put away' (or trash, or sell) the toys, games, books et al from when they were growing up. These things become embarrassments, articles that have been 'grown out of' and left behind. All I can say to that attitude is this:
"Shame! Shame on you all, you poor, deluded fools!"
This is for a couple of reasons - primarily that I rarely get the chance to call people 'deluded fools' and I embrace it when it comes. Also, I'm somebody who has never gotten rid of his 'childish things' in the physical sense - they're either all stored safely in my mother's attic or have been brought over to my apartment. Their function doesn't go beyond being ornamental, but just having them around is a positive reminder of who I was, where I've come from and why I'm here.

Being a guy who finally came out of the geek closet and walked into a Forbidden Planet for the first time in 2003, I still succumb to the temptation of picking up character toy tie-ins of interests past and present. If I see a 'Big Lebowski' John Goodman toy, why, it just makes sense that I should own it. A battery-powered Roadrunner Pez Dispenser? Ring 'er up! They make a Starbug that opens up, shoots missiles and makes noise? Why didn't this happen sooner?! 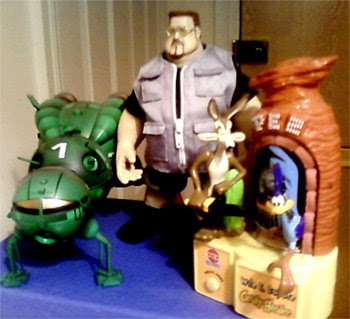 Well, I'll be. Turns out all three of those things actually exist...
I have to moderate these indulgent purchases, especially in this climate when all money really does need to go toward, y'know, being able to live. If I had the means then there'd be no room to move in my flat for the Nightmare Before Xmas paraphernalia alone. But there's nothing wrong with the odd one, here and there - it's far more honest deco than any crappy department store-bought sculpture. It's who I am, which happily coincides with how I'd like to be seen. Oftentimes people find those two at odds with one another. 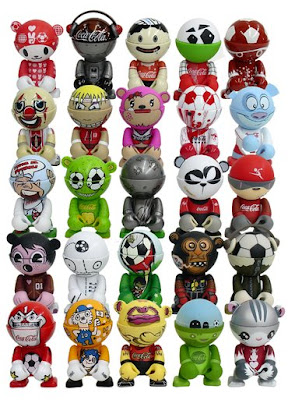 Here's something that confuses me though - designer toys. I'm not entirely sure what the function or audience for these is. Is it so that people who secretly want to have toys on display can refer to it as 'art' or 'ironic' if anybody gives them grief? Are they just for people who'll collect anything and have more money than independent thought? Are they actually very fun and expressive while my small brain just doesn't get why?
They certainly make use of a very 'in' character design aesthetic, whose origins seem to combine South Park and old videogames in their symmetrical, big-head-little-body theme. Some companies such as UNKL rarely deviate from one model per line, the differences between characters entirely down to the graphic design, treating the generic shapes as a type of blank canvas.

UNKL's limited edition Ipecac range, probably the only instance of a Mike Patton toy ever being made. If they threw a Rahzel in there I'd buy the set.
I've been meaning to expand on my character design work, as I haven't had many opportunities to take on different styles. Given the simplicity of these types of avatar-esque characters, it seems worthwhile to experiment with some of my own, either for portfolio purposes or maybe to promote some of the new music I've been working on.
Here are some geometric sketches that I plan on referencing for CGI modeling. Starting with a cheap'n'cheerful, ultra minimalistic version of me and some other characters to get the ball rolling. 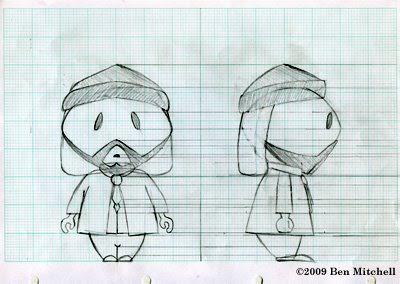 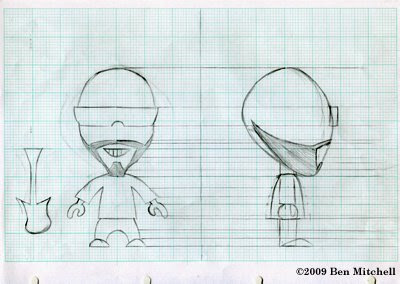 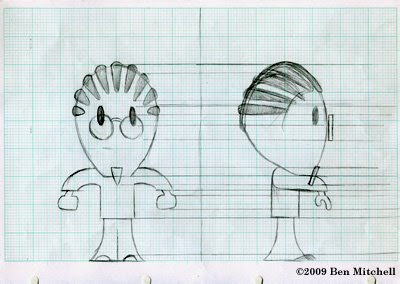 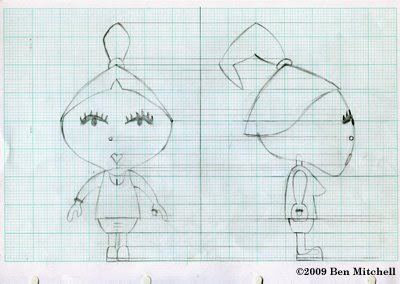 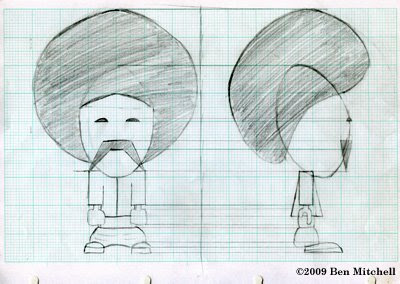 And here's a very fast, cel-rendered model that I whipped up on the fly to get an idea of an end-result visual. 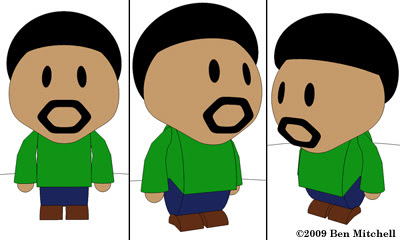 I'm thinking there's a new music video in this - this type of design work goes a long way toward selling a product. In 2006 my third Struwwelpeter album 'Agnosticaust' outsold any prior release by a long stretch, and several buyers who got in touch chalked that down to the album cover, which roped them in. It was adapted from a rabbit character I threw together for one of the music videos, which I would have made more detailed if it weren't for time restrictions. So one of my most successful design pieces (a shirt produced bearing the same design actually outsold the CD itself) turned out to be a complete accident.
In the meantime, I'm off to play with my old GhostBusters car and ponder why I'm not in any kind of committed relationship at the moment.
Posted by Struwwelpeter at 11:18 No comments: