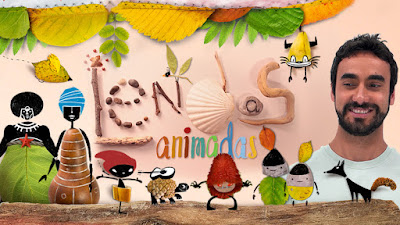 With a couple of screenings left for Lendas Animadas this weekend for the São Paulo leg of Anima Mundi here's a first look at the series posted on their newly-launched Facebook page:

It's great to hear things are moving forward and there should be a broadcast date before too long. Be sure to like and follow the page. Maybe brush up on your Portuguese a bit also.
Posted by Struwwelpeter at 07:03 No comments: 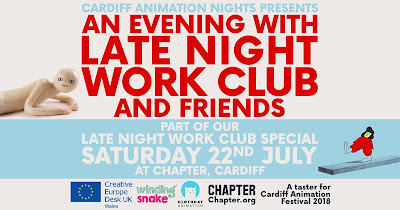 Just a reminder that this Saturday I'll be hosting An Evening with Late Night Work Club and Friends, closing out Cardiff Animation Festival's day of taster events focusing on the work of the independent animation collective behind Ghost Stories and Strangers.
Special guests will be several LNWC members - Nexus directors Nicolas Ménard (Wednesday With Goddard) and Conor Finnergan (Asshole), Cartoon Saloon's Louise Bagnall (Loose Ends) as well as Eimhin McNamara of Paper Panther Productions. We also may very well have one or two special guests Skyping in, so if you don't want to miss an opportunity for some brilliant indie animation insight then be sure to be at Chapter at 6pm on July 22nd.
Many thanks to Lauren and the brilliant Cardiff Animation Nights team for having me be involved. Be sure to check out the full line-up of events, including an animation feedback session, a drink and draw plus screenings of both LNWC anthologies. If you want to learn a bit more about the history of the collective and how their second anthology Strangers came together then check out episode 2 (stream below or download) of my Independent Animation podcast series below, featuring interviews with Nicolas, Kirsten Lepore, Sean Buckelew, Alex Grigg, Loup Blaster, Charles Huettner and Jeanette Bonds:
Posted by Struwwelpeter at 14:24 No comments: 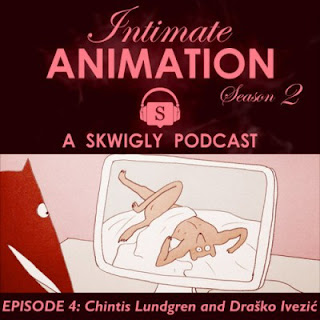 Posted by Struwwelpeter at 10:34 No comments: 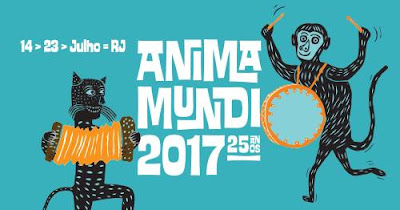 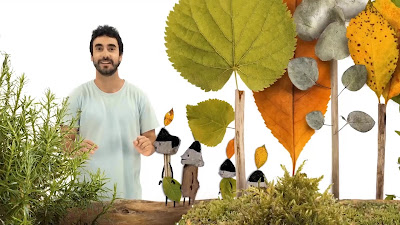 The particular episode featured is one I was lead animator on titled Como Surgiram as Estrelas (How the Stars Were Created) and will play in the screening Children's Shorts 2. I'm not sure when it will actually be broadcast but getting to be part of Anima Mundi again is grand news indeed as they've always been pretty good to me. As usual the festival has two sets of screenings in Rio de Janeiro and  São Paulo, the times/dates for our screening are as follows:
Rio de Janeiro
São Paulo
If anyone's able to make it to the fest it's looking like a great edition overall, with other selected work including Chintis Lundgren's Manivald, Rune Spaans's The Absence of Eddy Table, Eva Cvijanović's Hedgehog's Home, Ann Marie Fleming's Window Horses, Diane Obomsawin's I Like Girls, Jennifer Zheng's Tough and Sean Buckelew's Lovestreams.
Happy Brazil times!
Posted by Struwwelpeter at 14:37 No comments:

Black cats, late nights. That's not an expression but it sounds like it could be. 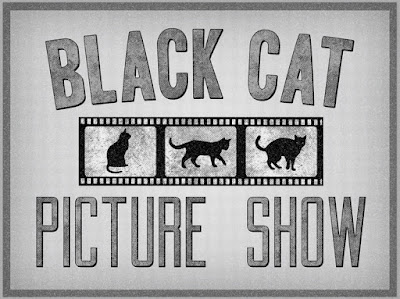 While it's a rarer occurrence these days, Klementhro still has a few more public screenings up his paddlin' sleeve. August will see the film screening at Augusta, Georgia's 3rd Annual Black Cat Picture Show that takes place, fittingly, at Le Chat Noir. I'll update with a specific screening time should I get it but in the meanwhile the event takes place from August 18th-20th and full passes are available now. 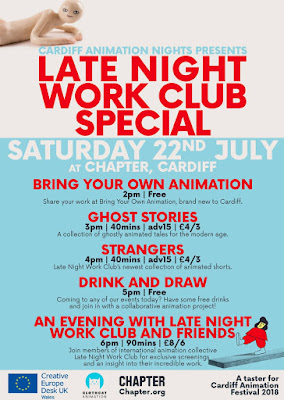 In the nearer future, later on in this month I'll also be involved in a special day of animation events put together by the Cardiff Animation Nights team. Serving as a taster for the recently announced Cardiff Animation Festival, the Late Night Work Club special will kick off at 2pm with a Bring Your Own Animation session, followed by screenings of the collective's anthologies Ghost Stories at 3pm, then Strangers at 4pm. After a 5pm Drink and Draw session I'll be hosting an onstage chat with LNWC members Nicolas Ménard, Louise Bagnall, Conor Finnegan and Eimhin McNamara to discuss all things indie animation and screen some of their work. It'll be a fun so be sure to book your tickets for the day and head over to Chapter in Cardiff July 22nd.
Posted by Struwwelpeter at 14:35 No comments: